Oh come on, Tony, there are lots and lots of good, intriguing backstories in film (and literature generally) that do not offend the action-film junkie and do not sound like "what I did wrong when I was five". And yes, there have been too many Freudian backstories and too many superhero backstories and too many other cliche backstories. Yet all great stories develop their characters. I mean, think how much we learned about Anakin Skywalker, the future Darth Vader, the ultimate symbol of evil, when he explained what really gets him going: "I don't like sand. It's coarse and rough and irritating and it gets everywhere." Now that is some fine backstory.

But back to "All Is Lost". Why is this sailing-incompetent --and presumably wealthy-- old man out there on the ocean all alone? Maybe our sailor's backstory is that he accidentally killed his wife in a drunken rage, and now he's running from the law and the horror of it all. Maybe he's a lawyer to the mob, and he embezzled from some folks who would like to leave a horse head in his bed... Or maybe he bragged to his friends that he could win a round-the-globe race and now reality is crashing in around him as he realizes that he has no sailing skills at all. Maybe he's a has-been action-film star trying to write a book based on some Hemingway-ish manly adventure on the ocean. Or maybe Leviathan, an enormous White Whale, nibbled on his leg once, and he shall have his revenge!  There's a story in there somewhere. 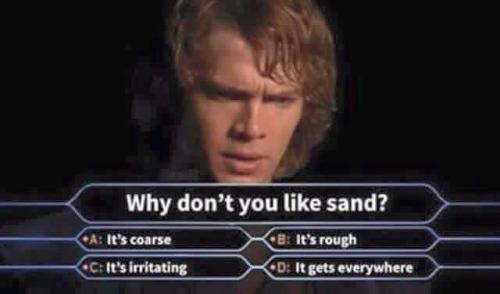