In the same Amundsen film, there are a couple of scenes with stars overhead. They're interesting. Like many recent movies, some astronomical software has been used to generate the starry sky, but digital artists have had their way with it. They can't help themselves. :)

So what are we looking at? The Northern Cross, officially Cygnus the Swan, is visible near the top of the frame. It's a nice symmetrical star pattern, which matters here. You can see the ghostly outline of a ship in the ice near the bottom of the image. The little constellation Sagitta is just above the masts, and the diamond of Delphinus is off the bow to the right. Meanwhile, high on the left, we can the parallelogram of the constellation Lyra, but something is missing in this distinctive constellation! And despite the symmetry of Cygnus, something is very wrong with the whole image. Do you see it?

The faults in these starry images are fun to spot, but they don't detract in any significant way from the scene. It looks like a starry night, and almost no one would notice these edits. In a way they are trivial edits. At the same time, they couldn't be more dramatic if you know the night sky! 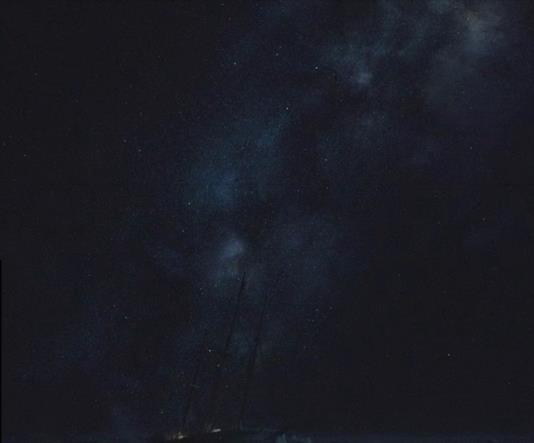