I'm glad that NavList visitor Frank Petrie re-opened this topic. I had a funny experience last week that I wanted to bring up. I watched five old movies/videos last week and in three of them I spotted sextants, just barely visible... You may have to squint a bit to see them, but they're there!

Number One:
In the postscript of a previous message, I wrote:
"4) Nine years later, Nuyen played the shrewish Elaan in Star Trek's "Elaan of Troyius"."
and "In my next trick I'll get you from here to an anachronistic octant in a production of "Hamlet" (of a sort)."

Right, so here we go. Star Trek has many connections to Shakespeare, but right there in the episode "Elaan of Troyius" (see, that's like "Helen of Troy" but in spaaace), the plot is directly based on "The Taming of the Shrew". Other Star Trek episodes and quotes reference "Hamlet" multiple times. And in the background of a scene in "Rosencrantz and Guildenstern are Dead", a movie from 1991 based on "Hamlet", in the cabin aboard the ship bound for England, hanging above Hamlet's head, we see an octant. It's a little ambiguous: is it an octant? Or is it not? That's what happens when you get too close to Hamlet. Though it's anachronistic in this production, it's setting the scene: we're on a boat, so there's nautical stuff.

Here it is, an octant above Hamlet's head: 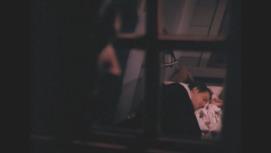 Number Two:
I'm sure some of you remember the British comedy series Blackadder starring Rowan Atkinson as various members of the "family of adder black" down through the centuries. In the season (series, as they say over there) set in the First World War, Blackadder and Hugh Laurie decide to become pilots, and their safety will depend on a navigator. Cue Baldrick as the intrepid navigator in goggles, and in his hand is a rather shiny (probably ornamental) sextant, which would never have found use in aviation above the continent during the war, but what the heck; it's a comedy!

Here we see the valiant Baldrick with his sextant:

Number Three:
There's a so-bad-it's-good "B movie" called The Angry Red Planet made in 1960. As our martian explorers recover from their battle with a giant bat-spider puppet thing, they come upon a great inland sea. And naturally one of them has remembered to bring a sextant. It's in the right hand of the astronaut second from the left in the screen capture below. See it? In the film, it's much more obvious that it's a sextant, but even in this still screen capture you can make out the micrometer and other components. Later he even raises it to his eye, as if he's using the telescope to get a view of the fabulous city on the opposite shore.

Here's the astronaut with his sextant on red, red Mars:

I wouldn't want our sliderule enthusiasts to feel left out, so I'm adding two bonus screen captures. A few years ago on a Yahoo sextants discussion group, someone proposed a hypothetical scenario: if you were stuck on a desert island, specifically if you were the "Professor" on Gilligan's Island, what would be your choice for a sliderule to have with you in your carry-on baggage for the "three-hour tour"? This was all "hypotheticall speaking", of course. And here we see an excellent example of amateur sleuths failing to consult the primary source evidence!! There were sliderules in episodes of Gilligan's Island! The Professor did, in fact, bring sliderules with him, and we see them plainly on-screen.

Here's the Professor working out the orbit of a spacecraft so that the castaways can attempt to signal to it: 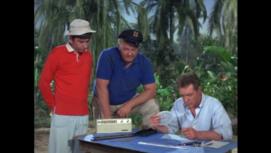 That was the 1960s when sliderules were still state-of-the-art for computation. But not to worry, according to a bit of goofy British science fiction, called Into Infinity, space travelers will still be working out course corrections using a sliderule centuries from now (course correction... ha! there's an order to "Turn 7 degrees to port" when they're travelling at 98% of the speed of light... don't try this at home!). You can watch this particular "goofy" sci-fi on youtube here. This was a production of the studios of Gerry & Sylvia Anderson who also created Thunderbirds, and UFO, and Space:1999 among others, and all of their creations have a distinctly familiar feeling and "groovy" aesthetic styling about them. The character with the sliderule is played by Brian Blessed.

Starship navigator working with his sliderule: 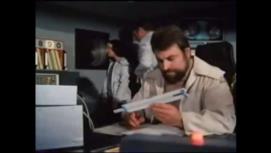