I'm drawn to examples of celestial navigation in movies. Some examples:

Poor - Cpt Nemo in Disney’s 1954 movie 2000 Leagues Under the Sea staring Kirk Douglas, James Mason, Paul Lukas and Peter Lorre, is probably the worst demonstration. A quick glance through the scope, declaration of "We'r here" and tosses the sextant to the first mate.

Curious - All is Lost with Robert Redford, interesting! But is he looking wrong way? The sun is to his back.

Good - Charles Laughton played a duty-obsessed, cruel and arrogant Captain Bligh in the 1935 movie Mutiny on the Bounty. He did a reasonable job for noon sights.

Good - Master and Commander: The Far Side of the World  a 2003 starring Russell Crowe as Jack Aubrey, excellent LAN shots while instructing young midshipmen.

Excellent - Das Boot, by far the best demonstration of sextant use is this German WWII submarine movie directed by Wolfgange Petersen in which navigator Kriechbaum takes an sunset star shot with a lovely Plath sextant. All elements are right on! See the attached clip.

Perhaps NavList viewers have seen others. 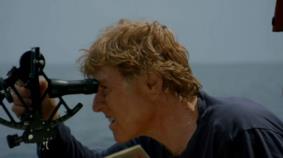