Australia is in the middle of a plate and to me it looks very boring.  It is much more interesting when you live at a plate boundary. I live not too many nm from one of the yellow lines in the attached image. I

If you want to calculate the distance/bearing between two points in NZ with extreme accuracy then you must apply a deformation model.

One iof my non-cn projects is to locate a 19th century boundary. From a survey map ca 1920 I have plane coordiinates. Near where I think the boundary was I have located a mark whose 21st century cooridinates I can look up.  I know (or think I know) where the zero point of each coordinate system is so by using plane  geometry I have determined that the boundary ran through the house next to mine. At least I think that I have. One set of cooridinates is in a plane system and the other is in a  geodetic system. Plus I am not sure if I am interpreting the zero points correctly. If  the ownership of my house depended on the boundary I suppose I could pay a geodetic surveyor zillions of dollars to plot the boundary but that would take the fun out of it which is to do it myself. Also NZ uses the Torrens land registration system so it does not matter if a 19th century surveyor had screwed up [1]. Torrens is a WYSIWYG system and titles are indefeasible (look that up if you want to).

Ramble over.........I may go for a walk along the major fault line which is a few hundred metres from my house.

[1] Near where I live an 11 acre strip of land magically appeared in the 1870s. I can infer that it is to correct a survey error when the original 100 acre lots were being chained but cannot prove it. The boundary of that lot is the line through my neighbour's house that I previously mentioned. 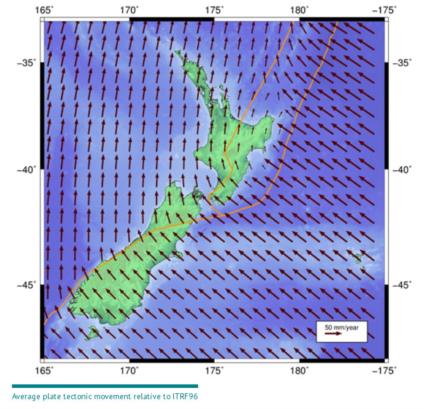