Quite some time ago, after Frank recommended it so warmly, I went out and bought a Casio fx-260 Solar II.  Inexpensive (right now, $11 CDN), solar powered, and Frank had demonstrated that it was waterproof.

I felt that it could speed up my sight reduction, however, to get a calculator that had the ability to store several different values in memory.  So I can save the result of the first Bygrave equation, and use it in a subsequent equation without having to punch it all in again.

So early this week, I went to Staples and for $20 CDN, bought a Casio fx-300-ES Plus (2nd Edition).  It is dual powered, and has both a solar display and also a replaceable battery.  They project the lifespan of the battery at 3 years, given 1 hour of use per day.  As with the fx-260, the back is affixed to the body using tiny Phillips screws.  You remove that back to replace the battery.

It has 9 memory locations.  So you can save the value of 30° 52.1' as "A", and hence forth use "A" in a calculation rather than typing in the whole value again.  And just like the fx-260, you can enter angular data in in the form of D° MM.M', with no need to convert the angle into decimal degrees, as in D.DDD°.

Another really nice thing is that it has a two line display, and will display your input equation on the top line precisely as you type it.  This means that before you hit the "=" key to calculate, you can go back and correct any typing errors.  Calculation results are displayed on the second line.

Further, you can go back and redisplay prior calculations, and edit them and recalculate.

I decided to emulate Frank and risk $20 to see if the unit was seaworthy.  I submerged it under 5 cm of water, and was able to solve a navigational triangle for a sunsight taken from my house.  I was able to read the display clearly, and punch in buttons, over the course of 4 minutes under water.

When not underwater, I can solve a triangle in 3 minutes.  Underwater, it took longer, as the unit wants to float, and I had to devote one finger to keeping it submerged.

The first calculator I ever saw was in 1971 or so, and it only did 4 functions, and cost $600 CDN, or $3,700+ in today's dollars.  I find it mind-boggling that Casio has managed to produce such a powerful, seaworthy calculator for just $20.  I recommend it to you. 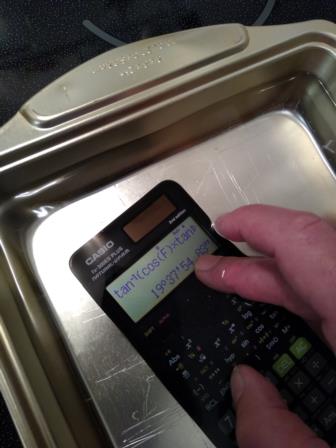