I have found a better image of the encampment on Elepant Island.

It appears in one of the papers by James Wordie (another strandee).  The better image is attached, please take a look.

If you look in the upper left hand part of the image, right by Gimlet Rock, you will find a point labeled "Cape Belsham".  This chart was created by Reginal James in 1916 and published in James Wordie.  There can be no more of an authoritative source of what point the men considered to be Cape Belsham, than the men themselves.

Needless to say, it is NOT the "N. point of Elephant Island", not by several miles.  The landmass referred to by the Ethiopics does not appear to be the landmass selected by Worsley.

The determination of the CE remains the central problem to the navigation.  In your own words Robin, Worsley would have known if the James Caird was half way up a mountain, stranded on a glacier. 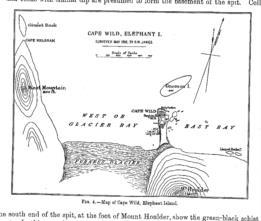