I would like to suggest an alternative version of events (assuming it has not already been discussed). The names Cape Valentine and Cape Belsham were marked on charts dating from 1822. When Worsley decided to use Cape Belsham to rate the chronometer maybe he determined the position from a chart.  If this is the case then Cape Belsham may never have been included in a gazetteer. See the attached image. The position of Cape Belsham is approximately xx 61'    yy 55'. OTTOMH I do not know if this is the position Worseley used.

The chart comes from

The Discoveries of Antarctica within the American Sector, as Revealed by Maps and Documents

Transactions of the American Philosophical Society

Professor Hobbs wrote the paper in an attempt to prove that the British fabricated evidence and that an American was the first to discover the Antarctic continent. That argument is not relevant here. What is important is the material incuded in the paper. It can be viewed on jstor. I registered for the free version so cannot download the pdf.

Hobbs suggested that names on a chart published by Laurie were added by Laurie in London. That lead me to ask who was the Belsham the cape was named after?  A very quick google gave me

William Belsham (1752–1827) was an English political writer and historian, noted as a supporter of the Whig Party and its principles. He justified the American Revolution in excusing Americans in their resistance to the demands of England, and he was an advocate of progressive political liberty.

If this was the person who the cape was named after I doubt that mariners would have heard of him. It is more likely that someone in London e.g. Laurie may have known about Belsham. 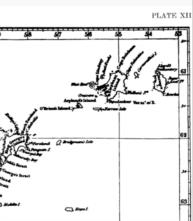