I was just making a comment on the linguistic shift that has occurred over the centuries. The word "equation" formerly meant something close to "correction" or "adjustment term". If I ask you for the "equation of time" on November 4, 2020, I'm asking for a number. It's a value in minutes and seconds -- the correction to be applied to Sun time (apparent time) to get real time (mean time, as underlies the laws of physics and kept by good clocks), or vice versa.

In the modern post-algebra world, the word equation has a different meaning. It's something like y=ax²+bx+c. The "equation of time" is not an equation in this modern sense. If you read old astronomy books, you'll find references to things like the "equations of the Moon's motion". They're referring to a list of separate corrections to be applied to the Moon's mean longitude and latitude to get its true position in the sky. The equations are a list of corrections. These "equations" (in the old sense) correspond to individual terms in the full "equations" (in the modern sense) of the Moon's motion.

Where did the creative team behind "Futurama" get their "equation of time"? In their case it's an actual equation (modern sense), which they used to make a joke about time travel (that's the purpose of the extra term which you noticed... it apparently makes time travel possible!). Of course, they went to Wikipedia. Go there right now. Open the article on the equation of time... and you will not find this equation, at least not "on top". Where did it go?! Wikipedia is not a fixed target, and you have to do a little forensic analysis to find the smoking gun. I can imagine a distant decade where historians study the never-constant, steadily-evolving, written and re-written articles on Wikipedia as sources on the zeitgeist of the early 21st century. But for us, it's just a matter of finding the right approximate formula with the same coefficients as the "Futurama" artwork by drilling down into the history documentation of the article. And there they are in the article on the equation of time on Wikipedia prior to September 2, 2009. I'm attaching a screen cap from that old version of the article.

One remaining curio: why did they divide by 364? I can't think of any good excuse. Maybe just a typo.

Of course anything that can be calculated can be rendered to an equation. So not only is there "an" equation that will compute the daily (and instantaneous) values of the equation of time, there are many. You can find them in various astronomy computing textbooks, and you can "roll your own" from more complete expressions. One approximation that I used for many years was included in Smart's "Textbook in Spherical Astronomy". Attached is a little spreadsheet comparing the approximation in Smart (6th ed. 1977) with the approximation in the old Wikipedia page which was used by the creative team of Futurama all those years ago. 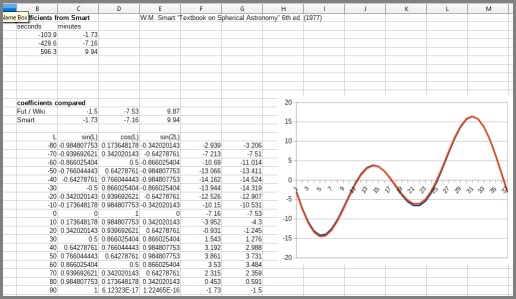