Reply
Re: Calculate new coordinates given bearing and distance?
From: Don Seltzer
Date: 2021 Nov 5, 16:29 -0400
The sandglass shown is 30 minutes.  Each time that it was turned, the bell would be rung, from one to eight during the four hour watch.  A peg would be put into one of the holes in the upper part of the traverse board to denote the ship's compass heading.  Probably the first concentric ring for the first half hour, second ring for second half hour, etc.
Once an hour, the chip log would be cast to measure the ship's speed in knots, which would be noted on one of the four rows at the bottom.
So, at the end of the four hour watch there would be eight course headings and four speed readings.
Don Seltzer
On Fri, Nov 5, 2021 at 11:12 AM Ed Popko <NoReply_EdPopko@fer3.com> wrote:

Tony's question brings to mind the age-of-sail's use of Traverse Boards to log the ship's speed and course during each four hour watch.

At the end of a watch, how did the navigator summarize the various course/speed changes to find the ship's current distance made good and DR position? 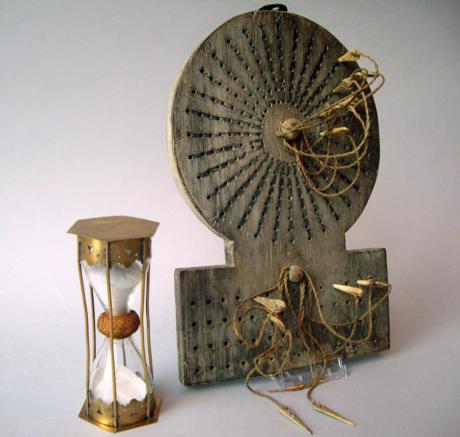