The whaleship Charles W. Morgan, centerpiece of the collection at Mystic Seaport Museum in Mystic, Connecticut, launched in 1841, will be making a goodwill and publicity tour of southern New England from late May through early August of this year. This is the first time that the vessel has travelled more than a quarter mile from its berth at Mystic Seaport since it arrived there in November of 1941. The vessel recently completed a comprehensive restoration and overhaul which has replaced essentially all original material. The oldest structural wood in it is probably not older than forty years. Though it is no longer an historical "artifact" in terms of its material composition, it has been renewed with the same wood, designs, and techniques that would be used to maintain any living wooden vessel, and in this sense, narrow as it is, it is still the same ship. This restoration has rendered the vessel seaworthy again, so the plan is to sail it a little this summer but mostly take it on tour. It will visit New London, Newport, Vineyard Haven, New Bedford, the Massachusetts Maritime Academy, Provincetown, and Boston. It will be open for public visitation at all of these locations for variable periods of time. They also hope to get some "photo op" images of the vessel under sail. Good luck with that: I expect the ship will be "escorted" by a flotilla of small boats wherever it goes. Notice also that the whaleship will sail for at least a day on the Stellwagen Bank National Marine Sanctuary where the ship and her crew will symbolically "apologize to the whales". Pulling this off without seeming hopelessly maudlin will be a good trick! They're calling this the "38th Voyage". During its career as a whaling vessel, the Charles W. Mogran sailed on 37 previous voyages, some only short hops into the Atlantic, but most reaching the far corners of the globe. 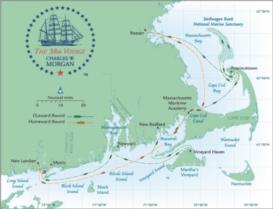