Aw heck.  You mean I can't make a sextant with a string, plumb bob and a toilet tissue tube?  Come on!!!

How in the heck am I to accurately divide the arc to the nominal resolution required.  Under the crazy assumption that he isn't going to manufacture precision gears and make a micrometer set up, nor make a vernier sextant, we can only assume that his string will read directly off the arc.  Take your observation, insuring that you are looking parallel to the axis of the toilet paper tube and the sextant itself is vertical.  Place your finger on the string to preserve the altitude.  Now without shifting the string, read the string position against the arc.  1/4 or 1/2 ° resolution would be good.

Of course, he could make a dividing engine like Ramsden, first!  Should be a piece of cake to center the index arm against the scale when he is done creating the arc.

Then he just needs an accurate ephemeris of the sun in the martian sky.

The author clearly does not understand the details of the problem.

This passage, which Greg has scanned, is just the author showing off his armchair understanding of navigation -- he read Sobel's Longitude, and that's about it. 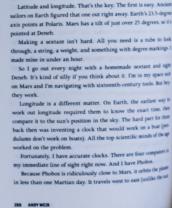 As for knowing that Deneb is an adequate pole star on Mars, these days you only need the Wikipedia article on "Pole Star" for that. Need more detail? Try the Wikipedia article on Astronomy on Mars which gives the RA and Dec (with excess precision) of the north celestial pole of Mars as 317.67669° +52.88378° (for SHA, subtract the RA from 360). Even ten years ago, this information was not hard to find on the Internet.

The general idea that an astronaut stranded on Mars, in an era thirty years from now, at mininum, when human exploration on the surface is routine, would employ celestial navigation methods to determine his position is childish nonsense. Of course there are numerous nonsensical elements in The Martian, but saying so risks offending the online hyper-nerd mania for the book and movie. According to the mania, "omg, like, The Martian is soooo scienterrifically accurate!" Bah. From martian windstorms to these cooked up problems with radio communication and hexadecimal-encoding and navigation, this is all just geek porn. Winds on Mars are feeble whispers by Earth standards, a threat to local visibility but not to life and limb. Communication would have been trivial since the rover most certainly would have had radio gear, and indirect comm through orbiting satellites already exists on Mars right now. Hexadecimal is much worse than plain old Morse code for the imagined task. And so on. Also, the movie is mis-named. It should be called The Potato since our main character, is never in any real jeopardy, and the only great unexpected tragedy is the death of hundreds of potatoes in the icy, airless cold of a martian night. Alas, poor Spud! I knew him, Horatio!

Nitpicking and spud-picking aside, for my real review of The Martian (the movie), I thought it was good, harmless popcorn-stadium fun. I give it a grade of B. It's worth seeing once. :)

Now back to Mars celestial navigation. Assuming, purely for the sake of argument, that there is no GPS-like automated radio-ranging system (which again, in an era when human exploration is routine, seems highly unlikely), then visual observation of orbiting artificial satellites (possible right now) and the two natural satellites will provide fixes quickly and at excellent accuracy. Let's use Phobos only. Phobos orbits a mere 6000 km above the surface of Mars or 9400 km altitude measured from the center of Mars. At this height, its apparent position, observed visually without optical aid, against the background stars determines an observer's position on the ground at a known instant of time within about 10 km. To "clear" these observatiojns, all you do is load up Stellarium or any equivalent software app and compare simulation with what you see. You can try this today. Assuming you have already installed Stellarium, find Mars in your sky (hit ctrl-f, type in Mars, hit enter). Now jump to Mars (hit ctrl-g with Mars as selected). To confirm that you are on Mars, find Earth in your sky (ctrl-f again). Note that your latitude and longitude take whatever values they had when you left Earth so you may want to pick a more meaningful observing location on Mars. At this point, I suggest you turn off the atmosphere (hit A). You'll be able to see stars in daylight on Mars with binoculars, or you can just wait until night, but for the demo the martian atmosphere is just a distraction. Now find Phobos in the martian sky, and run time forward until Phobos passes close to a bright star, which it will do several times daily. In the event, pretending you're actually on Mars, let's suppose you see Phobos eclipse this star centrally at some instant of UT. So adjust your latitude and longitude on the surface of Mars in Stellarium until Phobos does the same in the simulation at the correct time. That's all there is to it. Comparison of simulation with observed reality is the most basic form of navigation. You could do the same with artificial satellites orbiting Mars for considerably higher accuracy. At present there are five active satellites orbiting Mars, and surely in the exploration era imagined in The Martian, there would be dozens. So long as a martian explorer has accurate ephemerides of orbiting satellites, and surely he or she would have such data, then this form of navigation is simple and highly effective. By the way, the Phobos ephemeris in Stellarium today is not quite up to the task. The angular positions would be spot on, but the timing would be a little off. How would you deal with that?

For extra credit, can anyone name a highly acclaimed film from last year in which some of the main characters observe an earth-orbiting satellite ...and talk about it?