You attached this article:

That's great! How did you come upon this article by Trautner et al.?? This is, of course, exactly how one could get a navigation fix on Mars, and, of course, it's just what I described a couple of days ago (but I must emphasize: this is not what Weir described in his book). The only thing missing from their article is the idea of observing orbiting artificial satellites of Mars which would be considerably more accurate, but obviously the same principle. The ill-fated Beagle 2 lander was famously constructed "on the cheap", and its camera would have been chosen probably as early as the year 2001 implying quite limited capabilities. It's quite possible that it would not have been able to image the rapidly-moving, relatively faint spacecraft orbiting Mars at the end of 2003 when it landed on Mars, leaving Phobos as the best option. If this method were tried today, the digital cameras on modern landers would probably be capable of imaging one or more of the spacecraft orbiting the planet. It was, of course, one of those orbiting spacecraft, MRO --the Mars Reconnaissance Orbiter, which finally solved the navigation problem for the failed Beagle 2 lander and photographed it on the surface of Mars just a year ago, eleven years after it disappeared.

This mission failed just two weeks after I joined the NavList community in December 2003. Two and a half years later, I indepedently re-discovered the method of position-finding by lunar distances at known GMT (which is what Trautner et al. described in their article). If the Beagle 2 lander had succeeded, that method might well have become well-known in 2004, and the idea of using lunars for a position fix would have become part of NavList lore years earlier. As it was, when I first brought up this idea in mid-2006, it was met with incredulity: latitude by lunars?!? That can't be!

Of course the method was not without precedent even in 2003... It's unfortunate that Trautner et al. did not mention the Apollo celestial navigation method which was essentially the same but employing an actual sextant rather than a camera. It's interesting to note that when I discussed this method of position-finding by lunar distances in a presentation at a little informal conference at the National Maritime Museum in 2012, it seemed to be quite unfamiliar in concept to everyone that I spoke to. The idea developed by the Beagle 2 team was seemingly lost to history along with the lander itself.

The article includes a basic diagram describing the "cone of position" determined by a single angular measurement between a star and a nearby object, like Phobos. I like my cone of position illustrations (generated back in 2006) a little better! Note that the cone  collpases, and some considerable uncertainty can be eliminated if we wait for Phobos to eclipse some bright star. That's an option if you have options, but it would probably not have been possible for the limited capabilities of the Beagle 2 lander back in 2003. 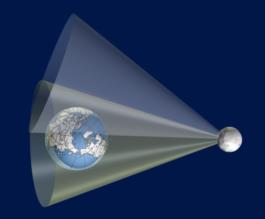 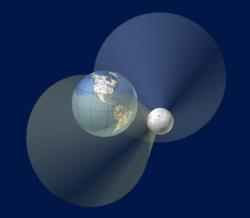 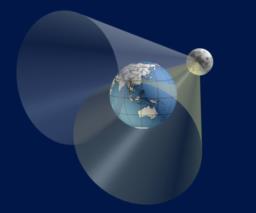