Sorry John…..I misread your original post. You said "JOH NYMAN" was actually on the cross-arm……..that would have been the name of the original owner most likely. But I would still guess at Benjamin Messer as the manufacturer.

Not too much comes to the fore when looking for a suitable diagram.

This may give you the general idea. There has been discussion here before as to how practical all this was – but not relevant to your question as to what the vertical slot was (though I always saw this as a horizontal gap).

The open slot between both mirrors was so that the shades could be used on the upper or lower mirrors – they can be slipped out of one position and into the second without too much trouble. I am sure you can test that on your own octant. 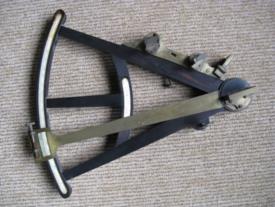