Lu, you wrote:
"I was in Bermuda 30 years ago and I distinctly remember IALA-A buoyage" and
"But I just looked at some on-line charts of Bermuda and it appears as if they have switched to IALA-B."

I think that could fall under the transitional period for an international agreement like this. The IALA rules were completed around 1976?? And the agreement was supposed to begin taking effect in 1980? Or 1982? I know only the most basic history of this. Of course at that time, this was only an agreement on paper --one that would have to be implemented in each legal jurisdiction, and that would take time. Does anyone know how long it took for the rules to become reliable? Bermuda, being a British territory, would seem to fall naturally under British maritime customs. But since it's close to the USA and since a majority of vessel and boating traffic was probably US-related by the late 1970s, presumably it made sense to switch to the IALA-B (Americas+) standard. After the agreement was confirmed, various local authorities would have announced their plans to conform to the new system within some time period. I wouldn't be surprised if Bermuda waited until 1985 or 1990 or even later to complete the transition. And I wonder how long there were prominent notices on display annoucing the changes... I did find one reference stating plainly that Bermuda was using the IALA-B "red right returning" standard as early as 1986. See attached.

Alternate theories: 1) you and your boatmates were having a whole lot of fun and sailed up the wrong side of every channel. 2) it was forty years ago nor thirty (and thus before the agreement). 3) you missed Bermuda and visited the Azores. Did you happen to notice a lot of Portuguese accents while "visiting Bermuda"? ;)

While we're here, and since I know so little about these regulations and agreements, can anyone confirm my "guess" regarding the Asian countries that use the primarily American buoyage rules (IALA-B): was this because these were areas whose maritime infrastructure was rebuilt by the US Navy and USCG, and thus on standard American "red right returning" rules, after the Second World War? The list includes Japan, Korea, the Philipines, and Taiwan (?). Or did Imperial Japan use a nearly identical standard pre-war?

PS: Here in Rhode Island, the local highways are finally being forced to conform to the national US standard on exit-numbering. Today, if you drive up I-95 from the Connecticut border, you will pass exit 1, then some miles later exit 2, miles after that exit 3, then a sign (no exit 4), and then exit 5, and so on. In most of the US on the interstate highways, exit numbers correspond to mileage. Of course, once you change the exit numbers, you need little signs that say "formerly known as exit..." and these will last for years. Pennsylvania switched all their exit numbers back in 2001 (if my Internet-backed memory is correct), but they had those "formerly" signs up as recently as five years ago in some locations. I wonder if Bermuda has "red right returning now in effect" signs dating back to the 1980s... 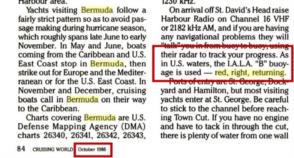