Ken.  Maybe I over egged the pudding a bit when I used the term “chasing across the field of view” although I have seen it occasionally.  I was just trying to make the point that the reason edge shots are not mentioned in air publications is because they’d be impractical (and unnecessary) in the air with a bubble sextant.  I agree, normally just a slight movement of the thumb is all that’s required.  I did, after all, say “tiny changes of heading and speed”.  Although a jet flying around FL430 ought to be in fairly stable air, the TAS is so fast that even small heading changes can have a big effect on the bubble (mv2/r and all that).  See the sheets below listing the errors to be expected from small heading and speed changes.
Not all bubble sextants had clockwork or electro mechanical equi-time-spaced averagers.  The basic RAF MkIX recorded three or four series of six trigger presses to be used as and when the navigator decided.  Earlier sextants had pencil marks on a paper disc or drum to be recorded when the navigator felt happy, and they used the median mark. The MkIXA had a two minute clockwork averager and the MkIXB and the RAF MK2 periscopic series had the choice of one or two minute shots.  The very earliest bubble sextants as used by Alcock and Brown and others were just a marine sextant with a spirit level reflected into the eyepiece.
In addition to pilot or autopilot effects,
I wouldn’t say the wandering of the bubble was all down to Dutch roll.  There are several solutions to the dynamic stability equations.  Dutch roll would certainly affect beam shots, but it’s unlikely that the period would be exactly one or two minutes.  Also, there might be other reasons for preferring a one minute shot such as brevity or sandwich fixing.  Fore and aft shots might be more affected by the long period oscillation or phugoid.  With pitch dampers, or a large tail volume, the short period oscillation would be too heavily damped out and speed is hardly affected in any case.  A solo pilot navigator trying to use a sextant in an aircraft with no autopilot would almost certainly be affected by spiral instability.  If you read some of the contortions Chichester described flying alone over the Tasman Sea, they sound very like spiral instability.  Fortunately, he was using a marine sextant and the sea horizon which would have been unaffected by acceleration errors.
Attached are photos of the Sun through a very dirty RAF MKIX(recognisable by the shadow of its hanger)  and through an RAF Mk2B pendulous reference sextant (recognisable by it’s “London Underground” graticule).  In my opinion, the RAF Mk2B is the best of the bunch.  Sorry the sun’s not in the middle.  I didn’t have enough hands to steady the sextants, hold the camera and operate the index mirror at the same time.  Dave 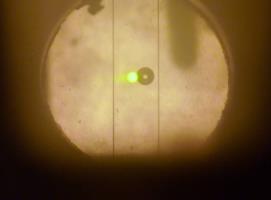 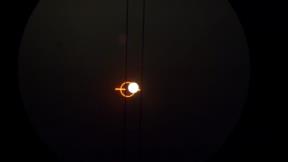