It is nice to see your prototype version. I've also made versions, but even simpler, just the diagrams printed on transparencies and pinned to a piece of cardboard. I have to agree that this is really simple and fast to use.

I'm also working on the verniers. I actually have now a slightly modified Brown-Nassau style computer. I've never quite liked different kinds of azimuth rules, so I thought about how to simplify the rules. My idea is to make the diagram twice the size by making it cover a half circle instead of the single quadrant in the original. I've found this semicircular version to be also very intuitive to use. It may not be practical for navigation due to the increased size needed for accuracy. On the other hand this computer feels very intuitive, I find it easy to mentally visualize the earth and azimuthal and equatorial coordinate systems on it as the two diagrams. So this might be useful e.g. in teaching sight reduction to beginners to help understand what is going on during the process.

I've attachted in this message these extended diagrams. These versions now also include the verniers. I will test my prototype a little bit more, and when I'm satisfied with the verniers, I'll include them also in the quadrant-sized diagrams. Feel free to also comment on this current design. 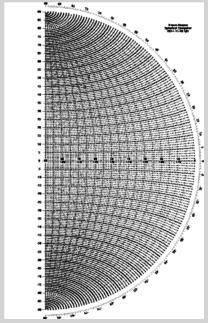 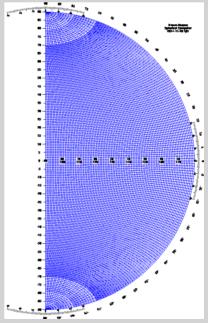