I have been investigating what I will call Brent's Double Altitude method. I have called it that because it is described in Brent's ex-Meridian Tables, not because Brent neccessarily devised it. Two sights are taken. The sight with the largest bearing is worked as a time sight and a Sumner line plotted. The second sight is worked as an intercept using the lat/long from the first sight as the assumed position.

Now to sidetrack.........an assumption fundamental to the Sumner and Intercept methods is that over short distances the circle of equal altitudes can be assumed to be a rhumb line or  loxodrome. I have seen statements to the effect that with high altitudes the COP must be plotted. However most descriptions I have read of the intercept method briefly discuss the COP/rhumb line issue and then assume that the intercept is a straight line.

Now back to Brent.......the reason for his  mixed Sumner/Intercept method is that it reduces the length of the LOP and so reduces errors due to the COP not being a rhumb line. Unfortuntately Brent does not give any numerical examples of the "error" so it is hard to know if his method is of any benefit to the practical navigater.

I determined my position Brent's method using  mid-morning and  mid-afternoon sights. I have attached the plot. I hope that it makes sense (-;

I present this as an interesting historical oddity. It is also proof that I have bagged Brent and can insert his name under Cloudy Weather Johnson. Blackburne next????? 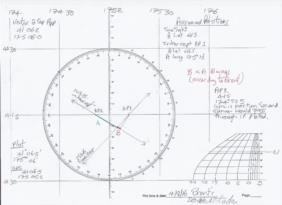