Back to Breed's "Pyramid".

In Post g30486, Hanno you indicated that "Breed's idea is to construct a tetrahedron T(pole, GP,  AP,  Earth's center )", which you subsequently correctly identified as a "pyramid" in Post g30498.

May I suggest that the Brent's Pyramid which you published is not this exact Pyramid which you actually described (i.e. the Pyramid with its vertices being: Pole, Observer, [Body Projection onto the Earth Surface], Earth's Center), but it is an extension of such Pyramid? This point is certainly explained elsewhere in the Book "Navigation Without Numbers", but I do not carry a copy of it.

There are a few reasons to this difference:

- If the lenght CP represents the Earth Radius, then the lenght between Center-Body and Center-[Body Projection onto the Earth Surface] should be the same. On the contrary the CS and CO segments are much longer than the CP segment. Accordingly the depicted points O and S are outside the Earth Surface. And,

- In the plan defined by OPS' Brent indicates a LHA value (here 105°) . This implies that this perculiar plan is perpendicular to CP, i.e. parallel to the Equator. Since this measurement plan also includes the Pole itself (Point P), it cannot include any other point belonging to the Earth surface. This is a second reason to see that the points O and S cannot be on the Earth Surface.

In order to better explain all this, I am enclosing a drawing of a Brent's Pyramid sample to be cut out and pasted. This comes from a great idea of yours, Shawn (g30493) and thanks for sharing it with us.

On the proposed Pyramid sample, the blank figure inside the "green lines" is the exact Pyramid with its vertices being: Pole, Observer, [Body Projection onto the Earth Surface] and Earth's Center. I shaded into grey lines everything ouside this Pyramid. Incidentally, the measured geocentric angular distance between Observer and [Body Projection onto the Earth Surface] falls less than 5' off the true computed value (67.5° vs. 67°34'2).

As you can immediately see, Brent's overall Pyramid is bigger, simply because if it is to display the LHA angle, then it has to display somewhere a plan parallel to the Equator. Brent made the choice of using the one such plan containing the Pole.

So, very special thanks to both of you:

- to you Sean because you gace me the idea of "building" one pyramid paper sample (here-enclosed), and

- to you Hanno because your reference to the book "Navigation without Numbers" is extremely interesting.

For all these reasons, I really believe that the Brent's Pyramids are a good 3D teaching tool.

Best Regards to all, enjoy cutting, pasting and gluing !

This drawing is fascinating. I need to study it in more detail. 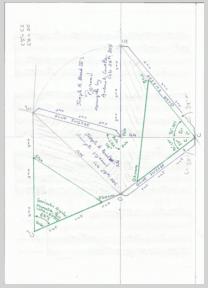