I encountered some folks in another online community who were skeptical of media reports describing the red color of the Moon arising from the "ring" of sunrises and sunsets all around the Earth, as seen from the Moon. I posted the following in reply:

So who first came up with this model suggesting that the red color of the Moon in eclipse comes from sunrises and sunsets all around the Earth? Um... folks... how about Johannes Kepler, who apparently first correctly proposed this explanation nearly four centuries ago. I won't try to read Kepler's original, but thanks to hathitrust.org, which has a great facility for searching old texts, I was able to find books from the late 19th century spelling this all out in terms only modestly more verbose than recent press coverage.

In 1874, James Nasmyth published a book entitled "The Moon, considered as a planet, a world, and a satellite" and he included a delightful description of the crimson ring of sunrises and sunsets that a "lunar spectator" on the Moon would see during an eclipse:
"This ruddy glow would extend itself nearly, if not all, around the black earth, and so bright would it be, that the whole lunar landscape covered by the earth's shadow would be illuminated with faint crimson light,*[footnote] save, perhaps, in some parts of the far distance, upon which the earth had not yet cast its shadow, or off which the shadow had passed. Although the crimson light would preponderate, it would not appear bright and red alike all around the earth's periphery. The circle of light would be, in fact, the ring of twilight round our globe, and it would only appear red in those places where the atmosphere chanced to be in that condition favourable for producing what on earth we know as red sunset and sunrise. We know that the sun, even in clear sky, does not always set and rise with the beautiful red glow, which may be determined by merely local causes, and will therefore vary in different parts of the earth. Now a lunar spectator watching the sun eclipsed by the earth, would see, during totality and at a 'coup d'oeil', every point around our world upon which the sun is setting on one side and rising upon the other. To every part of the earth around what is then the margin, as seen from the moon, the sun is upon the horizon, shining through a great thickness of atmosphere, reddening it, and being reddened by it wherever the vaporous conditions conduce to that colouration. And at all parts where these conditions obtain, the lunar eclipse-observer would see the ring of light around the black earth-globe brilliantly crimsoned; at other parts it would have other shades of red and yellow, and the whole effect would be to make the grand earth-ball, hanging in the lunar sky, like a dark sphere in a circle of glittering gold and rubies.
During the early stages of the eclipse, this chaplet of brilliant-coloured lights would be brightest upon the side of the disappearing sun; at the time of central eclipse the radiance (supposing the sun to pass centrally behind the earth) would be equally distributed, and during the later stages it would preponderate upon the side of the reappearing sun. We have endeavoured to give a pictorial realization of this phenomenon and of the effect of the eclipse upon the lunar landscape, but such a picture cannot but fall very, very far short of the reality. (See Plate XXII.)
*[footnote] We see this reddening during an eclipse of the moon (when the event we are describing— an eclipse of the sun visible from the moon—really takes place). The blood-red colour has often struck observers very forcibly, and it has indeed been suggested that the appearance may be the innocent and oft-repeated fulfilment of the prophetic allusion to the moon being "turned into blood."

Maybe you can imagine some late 19th century sailor reading this passage about lunar eclipses some sunny afternoon in mid-Pacific before a lunar eclipse night... Joshua Slocum carried a substantial library with him aboard "Spray" during his solo circumnavigation in the late 1890s, and, who knows, perhaps he even had Nasmyth's moon book in his collection.

I am including the above-mentioned "plate XXII", a late 19th century artist's attempt to portray this "crimson ring of sunrises and sunsets" as seen from the surface of the Moon --probably photoshopped ;) 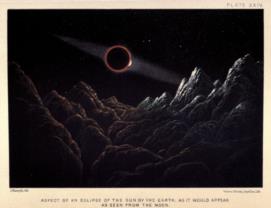