A 200mm fixed prime lens on a 10 MP digital camera was used for the partial eclipse images.  This lens has been previously calibrated for infinite focus so that each pixel = .0975'. The number of pixels from the observed Sun limb to the Moon limb shadow is 179 pixels. 179 x .0975' = 17.45'. An image taken of the Sun before the eclipse is attached and can be used to calibrate given the Sun diameter of 32.15' for the time and date of the image (CalSky web sight).

As for Frank's lunar calculator it is not clear what limb settings to set for a partial eclipse. I went with the setting that gave the more accurate result. The Moon diameter for this partial eclipse is 30.5' geocentric and 30.7' topocentric (CalSky) which is smaller than the Sun's diameter of 32.15'. There is then some asymmetry if calculating distances to nonilluminated or shadowed limbs. Maybe Frank can diagram how his lunar calculator handles the eclipse special case.

P.S. In a previous post I stated using a 400mm fixed lens which was incorrect. A 200mm lens was used. 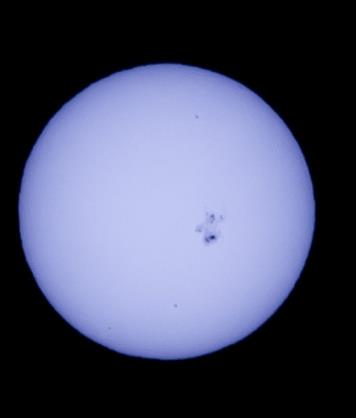