Reply
Re: Beware of Noon Sights this time of Year
From: Don Seltzer
Date: 2018 Mar 30, 20:39 -0400
I was slightly suspicious of this sea story, but I found an account in a contemporary issue of the Naval Chronicle that confirms the story.
The 1815 timing is interesting.  There was obviously no trade between the US and Gibraltar during the War of 1812, but the Treaty of Ghent was ratified by the US in mid-February 1815.  The provisions of the treaty allowed for different enactment dates around the world, with it not taking effect until a month later in the eastern Atlantic.  The Flying Fish might have been hoping to be one of the first American vessels to resume trade with Gibraltar.

I found another reference to a cutter Flying Fish being taken as a prize in early 1815 in the Caribbean by an American privateer and being sent in to some southern port.  It is possible that it was the same vessel and the new owners hoped to quickly turn it around with a new crew and trading voyage.  It is easy to imagine that in the haste to get to Gibraltar first some inexperienced men were chosen to be officers.

Here's a delightful story about the dangers of noon sights this time of year.

Its from Ocean Navigator magazine, March/April 1988. 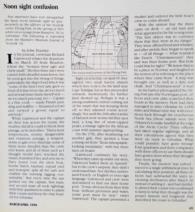