It's a nice example of the errors that are avoided by knowing a little algebra. As long as we treat South declinations and latitudes as negative numbers, and as long as we remember that critical trick of affixing a negative sign on the zenith distance when your "shadow points south", then we only have that single equation to remember:
Latitude = Zenith Distance + Declination, or
Lat = Z.D. + Dec.
All the situations that were formerly "cases" are covered by this single equation. It's also easy to re-derive by dealing only with the positive/positve case. We know that Z.D. is equal to "distance off" from the sub-Sun point, in every case of a celestial altitude observation. That's the fundamental bit of geometry that makes celestial navigation possible. And we know that declination is a type of latitude: it is the latitude of the sub-Sun point. And we know that at high noon, the sub-Sun point and the vessel are aligned along a line of longitude so their separation is entirely in latitude. Thus our distance off from the sub-Sun point gets added directly onto the latitude of the sub-Sun point (the Sun's dec) to yield our latitude. And that's it. Lat = Z.D. + Dec. The magic of algebraic signs automatically takes care of the rest.

Of course, even in the 19th century when they learned different rules for different cases, errors like this were very rare. And would three officers make the same mistake? Either it was an incredible example of "group think" (and maybe then a better title for this post would be "Beware Group Think") or quite possibly there is something else going on. In an era when navigation was not necessarily learned from books, parables were an important part of education. A good "yarn" about an error will stick in your head far longer than a worked mathematical example in a textbook. I have seen a similar story related second-hand in a journal at Mystic Seaport.

Nov 7 1844
[Today] In sweeping with the quadrant, found the altitude least at the north our latitude of course being greater than the declination. Our zenith distance accordingly changes its direction & instead of being north as it has been since leaving home it becomes south & the sun bears north. In calculating the Latitude we now add the zenith distance & declination instead of subtracting the less from the greater of them as we have hitherto done

In conversing with one of the crew a few evenings since, he related the following fact which occurred on board a whaling vessel in which he sailed a year or two since. They were on the voyage home from Ferdinand Noronha a small island off the coast of Brazil in 4° S Latitude. The vessel belonged in Provincetown on Cape Cod & was commanded by Captn Small. She has cruised during the summer for sperm [whales] off the West coast of Africa, South of the line. Thence they sailed to Noronha, which they left on the 11th of September 1843 bound to Massachusetts. They crossed the line on the 14th after which they had calms & made but very little progress until after the equinox on the 22nd. Capt S. having been south of the line whilst the sun was north. had of course a south zenith distance & a north declination & in obtaining his latitude had taken the difference between them. But not understanding the subject, although he supposed he must add them after the 22nd of September & accordingly did so. His ideas had probably become confused by the changes that had occurred very nearly at the same time. He had crossed the line thus changing his latitude, he had passed north of the line thus changing the direction of his zenith Distance, & the sun had crossed the line thus changing its declination.

At all events after the 22nd he commenced & continued to add his declination & zenith distance in calculating his latitude. The consequence was that he mad progress homeward in his Log book much more rapidly than he did in fact. The first thing however that troubled him was his Longitude. His latitude being too great affected his calculations for finding the ship's time, making that too small & of course his longitude too great. At length after a great deal of trouble with his chronometer, he concluded the instrument was very inaccurate & therefore entirely abandoned its use. According to his calculations it place them as far west as Lake Ontario - Not knowing how to work a Lunar, he was entirely unable to find out where he was - At last he asked the assistance of his mates & time of his crew who had [studied a little] Navigation, but they could afford him no relief. Supposing however their latitude correct they continued to sail North Westerly, keeping a sharp look out for land. Thus he kept on until his calculations placed him in 44° 11' N or more than 2 degrees north of his place of destination. He then changed his course and was steering South West for Cape Cod light when it occurred to him that he had mad a mistake in thus adding instead of subtracting the declination. this discovery solved the whole mystery. at the time it was made he was actually in 29° north & was heading direct for Bahama Banks. The intense anxiety of the crew occasioned by their total ignorance of their situation was now removed. To add to their distress during this season of gloomy doubt they had encountered a storm which had carried away all their topmasts; & they had also been upon short allowance both in water and provisions. However in a few days after getting upon their right course & repairing their broken masts they were further relieved by speaking a vessel which furnished them with supplies in due time after undergoing much suffering & incurring great danger from their own & their officers' ignorance of navigation, they arrived at home in safety. The name of the barque in which the above occurre d is the Spartan. She still sails from T. [P.?].

After relating the substance of this account to our officers, Capt G. mentioned an instance of a similar mistake. An individual having the charge of a vessel, added in this manner for some time, when he should have taken the difference of the declination and Zenith Distance. But finding his calculations gave him greater headway than the light wind he was then having could possibly do, he was led to suspect discover and correct the error before it occasioned any mischief. Mr. Watrous the First Mate, also related the case of a similar blunder committed by a man now master of a whaling ship out of New London. In this instance however it was immediately corrected by comparing the work with that of another person who had performed it accurately.

This story was re-told from one navigator to another. While something like this may well have occurred, it's an interesting case where the story matters more than the facts. It's a lesson to be learned! 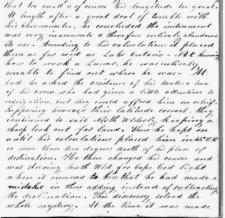