I know what you mean - my maths knowledge rusty but understanding of the 3D and 2D vectors I did university courses during flying in RNZAF - and have maintained my mathematical skillset with high level computer coding and still do - skilling up now on the latest Visual Studio VC#.NET - OOP language.

Interestingly - from my twin brother - who is a senior line captain Air New Zealand - was on 777 but now on AirBus 320 (as USA will now allow captains through their air space > 65 (we now 69) - so senior captains have to either jump to right hand seat for younger less senior captains or convert back to A320 which don't fly to USA.

The interesting point he made - as we are both mathematically and physics trained, and both did well in maths - and both continue to write high level computing code and learn newer high level languages - the captains who DO NOT have this skillset - have ALL failed to convert to the newer Airbus A320 as captains - interesting.

I continue to challenge my brain to mathematicail exercises as I think it just wards off age related problems.

I mentioned before but will mention again - in the 1970s - all astro calculations were done manually and for a 3 star fix worked out 10 -20 minutes prior - (but was easily undone as the P3B Orion was travelling at 360 kts - 6 nms/min so when you went to take the fix you were 120 nms further on and the weather often changed dramatically.

And in the 70s technology was changing quickly - no such thing as PCs - but hand held calculators were advancing quickly - however, you lost everything whenenver you turned it off - (1977) TI-59/ HP-41CV/CX Programmable Personal Calculator with magnetic strips for storage.

We used the RAF AP3270 Vol I, II, III for our astro calculations - so I inserted using appropriate spherical trig calculations - put all the 3270 info into magnetic strips - and to work out a 3 star fix - 1 min.

The beauty of this method was I could work backwards - if we were in and out of cloud (not unusual) - as I knew the navigational stars and could easily identify most of the needed ones quickly - I could just shoot at approximately 120 deg separation - and then work backwards and come up with the fix information after the event.

It was cumbersome as you had to leave the calculator on else the data vanished and you had to reread the data - and magnetic strips were not foolproof - they errored easily - so I always carried backups x 2.

Then the HP 42S scientific came out - retined its memory even when powered off - I had left P3c by then and was flying a desk - I still have my HP42S and still use - it the beauty of the Hewlett Packard over TI was RPN - which is s omuch easier to use to solve complex mathematics even today - but no one teaches it anymore.

Here is a picture of the HP 42S that came out in the late 80s and the HP 32S - a newer later version I gave to my son for his maths - he gave it back to me recently - way to complex he said -dad.

I note in a post yesterday by Ed Popko - with a link to an Air Navigation LHA XI computer - niffty little computer - we never had those in the RNZAF - might have to try and get one if they are around.

Sure computers nowadays make these things obsolete - but hey - when the battery or power goes on your electronic device - we are left dead in the water!

PS - took my new Davis Mk 25 sextant - packed the family and went to the beach - 2.5 hrs drive away - East Coast - so by the time we arrived and it was a cracker day and the horizon perfect the sun was west of me - and no moon - and I left my false horizon at home.

Oh well - the limits of the marine sextant - my A8A aero will arrive mid January. 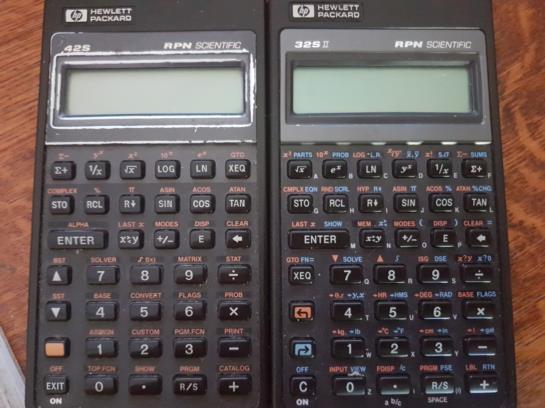