David Pike, you wrote:
"Despite being assured that all nav equipment will be provided, you find out at the last moment that their aircraft fit is very much 1970s, and their chart stock comprises one Mercator chart of the North Atlantic."

So you pull out your iPad :). Like most commercial pilots in the year 2021, you never go anywhere without your GPS-enabled iPad which is stocked with every last bit of information you can afford and loaded with apps that can solve any problem. :)

But for the sake of argument, since you're bored stiff on the long flight, and the autopilot is doing all the work, how could you solve such a problem? You can't do it directly on a Mercator chart. It's just not built for that. Suppose you have a nice rubber ball which you're bringing as a gift to your nephew who lives on St. Helena (you are under the peculiar delusion that rubber balls are scarce on the island). You get out a marker and a tape measure and you plot a north pole, a south pole, equator, prime meridian, 90°W meridian. Then you fill in longitude meridians for every 10°. You plot Bermuda and St. Helena. You can then stretch a rubber band between them, or you can hold the ball out in front of you and place those points symmetrically (visually) on either side of the visual center of the ball. The point halfway between is on the great circle. Repeat as necessary. Then read off the latitudes and longitudes of the great circle and plot them on any chart that you choose. Segments shorter than 5° (300n.m.) can be treated as simple straight lines or rhumb lines.

But that's not very math-y. Instead let's work in three dimensions both in spherical coordinates (lat,lon,r) and cartesian coordinates (x,y,z). These are "easy" coordinate conversions that qualify as secondary school "analytic geometry" --middle school or high school level math in the US (see Wikipedia). For our start and end points, lat and lon are as given and r=1. We convert those spherical coordinates to cartesian. Then we can easily calculate any point along the straight line connecting them in x,y,z. We do that for each 5% of the distance between the points along that straight line (which passes through the earth's interior). We convert all those points back to spherical coordinates. Each point on the straight line now has a lat,lon,r position (where r is less than 1 in all cases on the line except the end points). Here's the trick: the great circle is directly above the true straight line between Bermuda and St. Helena. That means that we replace those r values with 1, and we're done. We now have the lat,lon coordinates on the surface of the earth. More directly, we just ignore the r values. The lat,lon coordinates of the straight line are all we need. Now plot those on any chart you choose. If you find that the spacing between points is greater than 5° on the Earth's surface, then you go back to the original three-dimensional straight line and interpolate a few more points between the ones you already have. I'm attaching a simple spreadsheet of this process as a demo.

Finally, as they still teach it in some navigation schools, you find your start and end points on a gnomonic chart, draw a straight line between them, and then transfer intermediate points to any chart (projection irrelevant). Note that the gnomonic chart does not need to cover the actual geographic area in question so long as it includes equivalent coordinate points. 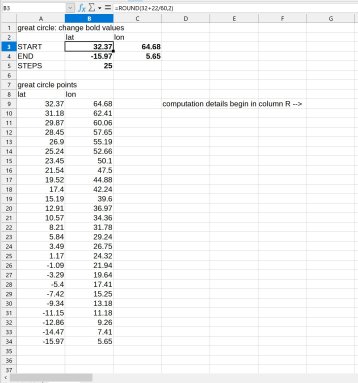