While sitting in the car waiting for SWMBO [1]   I  was playing with the GPS Test Plus app. I noticed something unusual - the number of satellites in use was the same as the number in view. Usually in use is three or four less than in view. Then I realised that the Beidou satellites were in use.

For a brief moment there were 30 satellites in view but I was too slow to do a screen grab. I find it amazing that this was while I was sitting in a metal box. I hope that the proposed large constellation of interrnet satellite does not interrupt GNSS.

[1]  SWMBO =  "She who must be obeyed"  from a BBC TV programme called Rumpole of the Bailey (as in Old Bailey). 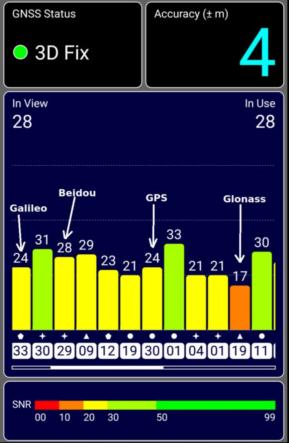