Hello Grace O’farrell
That’s great stuff and good to see.  The Moon and the Southern Hemisphere meant I had to put my thinking cap on.  Air navigators tend to avoid the moon if they possibly can.  I followed most of your working and ended up with the same azimuth and intercept as you, but I used spherical trig directly.  I’ve not really studied maritime tables in any depth, but you’ve prompted me to try.  I’ve got my dad’s stuff on my bookshelf.  I see what you mean now about the minus 30 for the upper limb.  It’s a ‘gotcha’.
An air navigator would have approached the problem slightly differently.  They would have used an assumed position of 5°S 071°015’E. That would have given round numbers for latitude and LHA.  You could go into air navigation tables with those and come out with Hc and Z in seconds.  We use bubble sextants and aim at the middle, so we don’t need to worry about dip and semi-diameters.  You get the same position line within a mile, but the intercept is different, because you plot it from a different starting position. Here’s hoping you’re not too badly restricted by the Covid crisis and that the Cruise Industry will be up and running again soon (Sorry, I looked you up on LinkedIn!).  DaveP 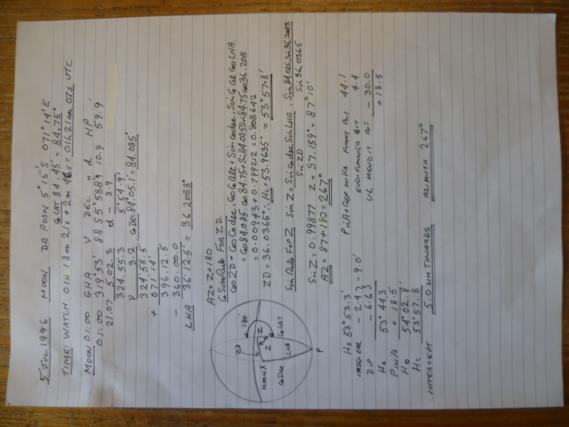