Brad Morris, you wrote:
" Without due accommodation to the roughness of the limb at the point of contact, the distance measured will be slightly wrong. "

Yes, Brad, I have written about the mountainous lunar limb and its impact on lunars quite a few times here. You've over-estimated the issue by a factor or more than three, as you correctly guessed. In fact, the uncertainty in the limb (not accounted for in a simple spherical model for the Moon) is on the order of two to three seconds of arc. So, no, it does not amount to anything approaching 0.17 minutes of arc. However, if you're out by 0.05 minutes of arc (three seconds of arc), then you might expect systematic rounding errors under some circumstances. Note also that individual extreme lunar valleys are of no concern for this issue, though they're highly relevant for producing nice examples of Baily's beads. Extreme valleys don't matter for lunars because the process of aligning a lunar involves sweeping or swinging the other celestial object by the limb of the Moon so it depends on the mean level of the lunar limb in a region several minutes of arc across. There's still a lunar limb effect since there are a number of large basins near the lunar limb. The Aitken basin, which you mentioned, is an example of this sort of thing, but as you correctly noted that basin is on the far side of the Moon so not relevant for this issue.

Eclipse planners have been preparing limb profiles in advance of eclipses for decades. You can read Fred Espenak's account of them here (only recently updated to include brief mention of the dramatic revolution driven by spacecraft data) I'm including one of these limb profiles here, attached. You can get a good idea of the scale of features. They're exaggerated in the profile, of course, but there's a scale of arcseconds toward the upper left in the image. The profile is different for every eclipse. Although these profiles have been around for a long time, the old profiles were known to be inaccurate in a variety of ways. Visual observations of lunar occultations of stars, especially those grazing the limb, were formerly important in refining the limb profile models. That's all changed in the past ten years since spacecraft orbiting the Moon have finally produced something never before available: highly accurate, detailed DEMs or digital elevation models of the Moon's surface. It's not hard to find the data online. I have played around with creating a system to correct lunars for those extra couple of arcseconds, but it's a project for which there is little market demand so I've put it aside. If demand emerges, I might get into it again. In any case, testing arc error is only one modern use for lunars. Folks have lots of reasons for shooting lunars, and I find they don't really need another excuse.

As for lunar librations, that's essentially trivial for the primary librations that affect this issue. They're really quite simple perspective issues. There are also physical librations, but these are very small and don't concern us.

You wrote:
"For those of us hoping to accurately measure the lunar distance as a test of our sextant skills, we are certain to be disappointed with the final tenth or so, as the limb roughness continues to elude capture in the reduction.  "

Actually it works quite well. I realize you're laying the groundwork for your sextant calibration "service", and there's nothing wrong with that.

You added:
"Yet I wonder if non computer driven lunar distance reductions will easily capture the effect. "

I agree that this would be a real nuisance to render into a paper method, but so what? Do it on a computer if the purpose is sextant calibration. Folks who explore non-computer methods of reducing lunars have certain goals. For example, they're interested in historical methods. Or they get pleasure from manual computation. But we all know that if you want the thing done right, you let an app do the heavy-lifting. Long before you get to this business about limb topography, you have to worry about small effects driven by the oblateness of the Earth, the altitude of the observer above sea level, and changes in the apparent semi-diameters of the bodies caused by refraction. Few of the manual methods for clearing lunars have ever included these small elements. Indeed, few of the modern computer methods have included these factors. Needless to say, my online clearing tool on my website at reednavigation.com/lunars/ has included all these small corrections for over a decade. Everything larger than an arcsecond in the clearing process has been accounted for, I believe, except the lunar profile (topography) correction which can amount to as much as two or three seconds.

PS: For those of you on Facebook, Fred Espenak happily accepts "friend requests" and you can add him to your list of contacts. For those of you who dismiss FB as the dark domain of teens and millennials (ha ha), you should know that it is actually quite top-heavy with retired guys with white hair like Espenak. He is still, most definitely, "Mr Eclipse" and frequently posts interesting tidbits from the soon-to-be-everywhere world of eclipses. 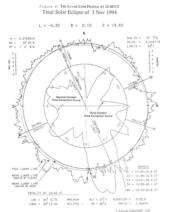