The answer to your problem lies in the way you’re interpreting “if the local hour angle is greater than 180°, it is treated as a negative quantity”.  The LHA is 359.8384 degrees.  Treating this as negative gives -359.8384 degrees.  However, a glance at the cyclic curves for sine & cosine shows that both sin and cos of -359.8384 degrees are positive and the same values as sin & cos of 0.1616 degrees.   However, I’d avoid using formulas which refer to LHA for great circle sailings.  Some versions of Bowditch simply use Dlo instead of LHA and L1 and L2 instead of L and d and these are much easier to use without head scratching http://msi.nga.mil/MSISiteContent/StaticFiles/NAV_PUBS/APN/Chapt-22.pdf P332 .

The Boring Bit.  However, I’m not going to let you off that easily.  I’m going to bore you with how I got to that conclusion via the snaps below.  First I changed the latitudes and difference in longitude to whole degrees.  Then I drew the relevant PZX triangle.  This is a classical two sides and an included angle situation, so you can use the spherical cosine rule to work out the value of the third side.  As it’s a great circle, you can multiply the angular value obtained by 60 to get the distance in nautical miles.  As I’d now got three sides, I could have used the spherical sine rule to get Z, but it’s better practice to use an independent formula, so I used the appropriate “four parts rule” instead.            Then I substituted back into the sine rule formula to check the distance and Z that way.  I got the same values that you’ve been getting with Z = 003degrees 55’.

Then I turned my attention to Bowditch.  It’s virtually the same as the “four parts” formula I used, except it uses sin angle = cos 90-angle and vice versa, so it can use the lattitudes directly.  Z is both numerically and directionally correct so long as you follow the Z greater than 180 degree rule correctly.  In fact, for this particular triangle, sin and cos -359 degrees are both positive and the same value as sin and cos of 001 degrees.    Sorry, can't get out of italics. Dave 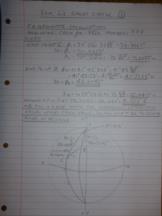 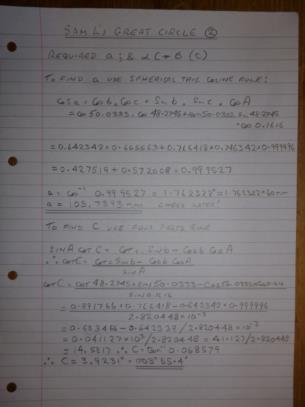 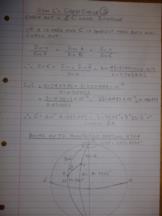 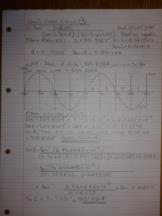