Over the weekend of 3-4 August last year Frank Reed hosted a workshop entitled Longitude by Lunars at Mystic Seaport, CT. The challenge was issued to interpret the sights that were made on Major John Powell's 1869 expedition through Grand Canyon and possibly write up an article on the conclusions. That challenge has now been met with the online publication of Astronomical Observations of the 1869 Expedition through Grand Canyon by Lars Bergman and myself. Assignment to printed edition will happen later. The article can be viewed online using this link https://www.cambridge.org/core/journals/journal-of-navigation/article/astronomical-observations-of-the-1869-powell-expedition-through-the-grand-canyon/D5627421BA12E49147E637BAE25F497F/share/d3684665dccf0a25c69599b9f08bc483f2be78a2 which is also included in the attached PDF file.

To summarize our conclusions: We found that despite having one arm, Powell was a competent observer when it came to meridian altitudes and Polaris altitudes for latitude. Noon sights were not possible because at the time of year the Sun transited above 60° and could not be observed with a sextant and artificial horizon. For longitude Powell planned to do Equal Altitude sights to determine the time of local mean noon. Unfortunately his boat was swamped which rendered the chronometers useless. As a contingency he attempted to observe a solar eclipse and perform lunars to get GMT. The eclipse was clouded out. It appears that Powell had little or no practice with lunars as all his observations show inconsistencies between the lunar distance and measured altitude of the Moon and other body to the extent that they do not pin down longitude.

My own efforts at Equal Altitude sights for local mean noon were described in the post http://fer3.com/arc/m2.aspx/Longitude-Equal-Altitudes-Stuart-jul-2020-g48277 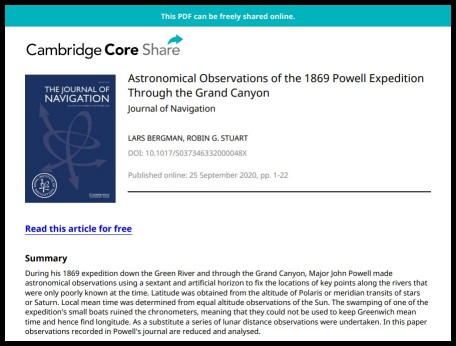