Well, I took a close look at the photo Dave Walden posted, and it’s actually the same as a photo I’d already downloaded.  It just looks a lot better, because it’s higher definition.  I thought I’d start experimenting with anyway.  I printed off two copies and cut out the inner scale.  Then I mounted it on a drawing pin on top of the outer scale.  The centre of the scale is not the centre of the grid, so it’s not quite an overhead shot, but I pressed on anyway.

The main snag with the Appleyard scale is that it’s not continuous.  Unlike the Dalton scale, which is continuous, the Appleyard jumps from 270 to 10.  This means that if you look at 180 minutes on the inner scale, you get a silly reading on the outer scale.  You have to go round to 18 on the inner scale to find 300 miles on the outer scale.  After that you’re OK again 24 = 400 miles, 30 = 500 miles.  This is OK when you’re fresh and rested, but is going to be a headache when you’ve been flying in a cold noisy aeroplane for several hours.  The work progresses.  DaveP 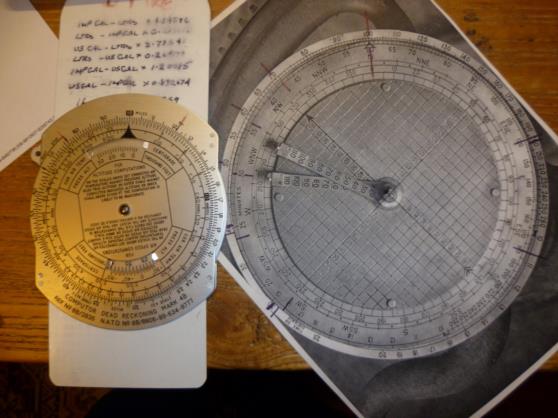