2019 being the centenary, I thought I might concentrate upon the race to fly the Atlantic.  At the moment, I’m looking at a possible paper unravelling the working of the pre-Dalton Course and Distance Computer designed by Cdr Rollo Appelyard RNVR around 1917 and used by Sir Arthur Whitten Brown in the Vickers Vimy.  I’ve defaced the photograph below to save any copyright problems.

Firstly, does anyone have this model and could send me a few attributable photos of it.  Roger Connor has sent me photos from the Smithsonian, but they’re later models without the outer scales.

Secondly, I think I’ve got using the central coarse finding bit cracked.  Even if you’ve dropped your 2B pencil, or are wearing thick gloves, I think I can see how you could use it in your mind.  However, I’d like to make a model.  I’m happy I can make the coarse finding bit, but I might find reproducing the time and distance scales a struggle.  I thought I could just cut bits of the photo out, but it’s somewhat elliptical.  It’s clearly a logarithmic scale, but it goes from 10-270 compared to the Dalton which goes from 10 to 100 and is therefore continuous.  I’d assumed it was to base 10, but the fact that the scale goes 10-270 unnerves me.  270 is 100 x 2.718, and Appleyard was a very clever chap.  Do I need to start thinking about the exponential function, which I never understood at school, and my understanding hasn’t improved since?

Thirdly, drawing the scale is going to be tedious.  Is it possible to do it using Excel?  In the spreadsheet below, for which I’ve assumed base 10 logs, I’ve got as far as radial values for the numbers in terms of degrees from 0-360 and also in rectangular coordinates.  Presumably I could do the same using natural logs, if I can remember how.  However, just measuring the angles in the photo, 30 miles equates to 120 degrees and 90 miles equates to 240 degrees, so maybe it is a base 10 scale after all.  Could any of you clever chaps show me what to do next to persuade Excel to draw the scale for me?  Thanks DaveP 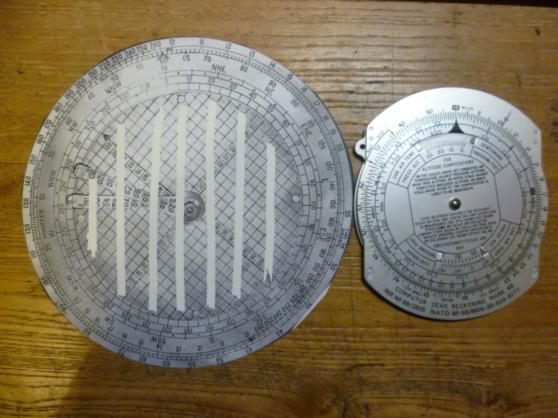