Don, thanks for pointing this one out. For anyone who didn't follow the link, I am attaching a copy of a portion of it. It's pretty. But it isn't real. By my analysis, this image is ALL fantasy, or more generously "digital art".

The vessel is a little too neat. Notice that nearly all of the rigging is perfectly straight. The end of each mast and spar is perfect in outline. And everything about the vessel is just a little too perfectly symmetrical. For me, the real proof that this is a "digital" ship are the furled sails. Look at the sails on the second and third spars counting down from the top. Apart from scale and a slightly rotated attachment to their respective spars, they're identical. And if you crank up the brightness and contrast, there are more details that are the same on both furled sails. That just doesn't happen in the real world. I would guess that there is some specific 3d imaging software that includes the ability to generate a 3d model of a sailing vessel like this. I would love to know the name of it.

The Moon suffers from the same problems as the "Moon" in the last digital image. Its limb is perfectly smooth and circular in outline with no mountains or other valleys, and it is not flattened by refraction, which it certainly would be if the altitude of its center is about half a degree, as it would have to be if the image was real. Notice, too, that there is a style of "limb darkening" that doesn't match the appearance of a real Full Moon which has almost uniform brightness right up to the true limb. If you look at the Moon in other simulation software, like our old friend "Stellarium," for example, you may find that it has a nearly identical pattern of limb darkening compared to the Moon in this image. Also, it is at least "suspicious" that the orientation of the Moon is perfectly vertical: the Moon's axis from north-to-south is aligned with the local vertical. This would be a rare occurrence (see below).

Also notice that the sky is just a layer of color across the whole image. The sky should be brighter right around the Moon. The ocean waves aren't too bad, but they also are clearly "cgi".

So, ok, it's all generated in some 3d modelling software. Now we know what it is. But what could we learn IF this was a real photo? First, let's go with your suggestion, Don, that the vessel's beam is 30 to 40 feet. Call it 35 feet for a specific number. Then using a mean angular diameter of the Moon as a scale and counting pixels, that puts the distance to the vessel at about 9000 feet. So the photo would have been taken with high magnification. From the location of the horizon relative to the vessel's apparent waterline, we could work out the observer's height of eye (I will pass on this one). If we knew when the photo was taken within one year or maybe even a couple of years, we could probably figure out the date. Full Moons are similar from month to month, but there are significant differences in the foreshortening of certain features due to "librations" in the Moon's orientation. In this particular case, notice that Mare Crisium (the dark oval "eye" towards the right side of the Moon) is a relatively open ellipse. This means that that side of the Moon is tilted more towards Earth than average. Also the northern parts of the Moon above Mare Imbrium are tilted back and away. This combination could be quantified and compared against known librations of the Moon to yield the specific date. Finally we have this unusual circumstance where the Moon is nearly vertical relative to the horizon. Its axis of orientation is perpendicular to the ecliptic within 5 degrees, so that means that the ecliptic has to be nearly parallel to the observer's horizon, and no more than 4.7 degrees below it to 5.7 degrees above it, when the "photo" was taken. Knowing the date from the librations, we could be much more specific. This would narrow down the possible observing locations to a band of latitude on the Earth's surface perhaps a hundred miles wide under some circumstances down to ten miles wide for other dates of the Full Moon. The longitude could maybe be limited by the actual "fullness" of the Moon but to no better than about half a hemisphere of the Earth's surface. 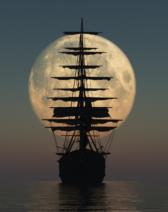