Reply
Re: Another fake Moon
From: Lu Abel
Date: 2015 Mar 3, 02:17 +0000
I'm sure those much more erudite than me will find a much longer list, but to start it off:
1.   The moon is waning, not waxing, despite the claim it is 6 days to full moon.
2.   Moon is blue, not white!
3.   The moon is football shaped, does not display full illumination across 180 degrees of moon's outline
4.   Craters look horribly artificial
5.   Craters look as if they're being illuminated from the wrong direction.
Must have been an extremely cheap flick where they didn't pay for a reasonable special effects person to do the moon.
Okay, Frank, what movie and what location in Manhattan??

From: Frank Reed <NoReply_FrankReed@fer3.com> To: luabel@ymail.com Sent: Monday, March 2, 2015 5:11 PM Subject: [NavList] Another fake Moon
We have occasionally discussed photos of the Moon that are computer-generated or fake or modified. Here's another for your analysis and entertainment. There are clearly some "issues" with this moon photo, which is surprising in an otherwise scientifically-themed film. How many problems can you find? You should know that the movie informs us, just a few seconds before we see this image, that it is "six days" until full moon. The location is Manhattan (*). The film starred Tom Hanks in an early big-screen role. This was an era when computer-enhanced imagery had not yet conquered Hollywood.
Frank ReedReedNavigation.comConanicut Island USA
* and if you were to go today to the spot where the foreground buildings were photographed, you would be less than 100 feet from the famous Apple Store Glass Cube just off the southeast corner of Central Park --a store which opened 22 years after this film was released in theaters.
Attached File: 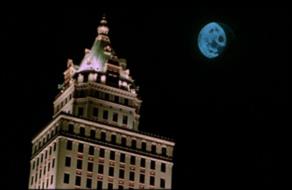 (mixed-up-movie-moon.jpg: Open and save)
View and reply to this message