David Pike, you wrote:
"Betelgeuse on the other hand is much more familiar. It’s +0.1 magnitude, a unique colour, easily recognised, and you can amuse young children by calling it Beetle Juice. "

Amuse young children... Meh! Pfff! Bah! :) That pronunciation is the correct and proper pronunciation and has been for a very long time. Of course during Office Hours today, I heard you pronounce it with the first two syllables rhyming with "pedal" and "metal", as if spelled "Bedal-juice", and there's nothing wrong with that (except everything).

Many navigators and astronomers have pronounced it as if "beetle juice" for decades, centuries even, but some were embarrassed by this prononciation, and there were many options. But for some 42 years, the pronunciation has been locked down and confirmed by one of the great works of British literature. Those who know their great British fiction of the 1970s casually will say that they have "seen" this work, since there are film and television adaptations. Those who are more familiar with this work (and slightly snobby) will say that they have "read" this work, since it was also published in book form. But those who are connoisseurs (and too snobby to even fit on the scale), including me, have "heard" this work in its original medium, namely radio. That great work, a cornerstone of modern British culture (right up there with Hamlet and Blackadder, it is), as well as science culture globally, is, of course, The Hitchhiker's Guide to the Galaxy. It began on BBC radio in March, 1978, which happens to be 42 years ago! And within the first five minutes of that first broadcast, our narrator pronounces the name of Ford Prefect's home star, his planet being "in the vicinity of Betelgeuse" --and he says "Beetlejuice". No other source for pronunciation need be consulted. The Guide has spoken. You may listen below...

By the way, you mentioned that the magnitude of Betelgeuse is around +0.1 but of course it's variable and the "big news" in late 2019/early 2020 before the other "big news" hit was the sudden dimming of Betelgeuse. Below you'll see the AAVSO light curve for the last ten years. It's remarkable how much range there is in the brightness of this famous star.

PS: According to the late Paul Kunitzsch (if I remember correctly), Betelgeuse should probably be Yadalgeuse. A dot in an Arabic transcription may have gotten lost somewhere in medieval Europe. Drop a dot in the Arabic alphabet, and you switch from Y to B (that's from يـ to بـ ). 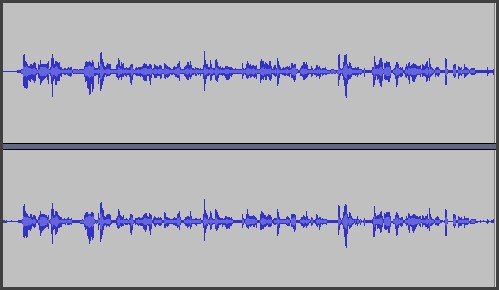 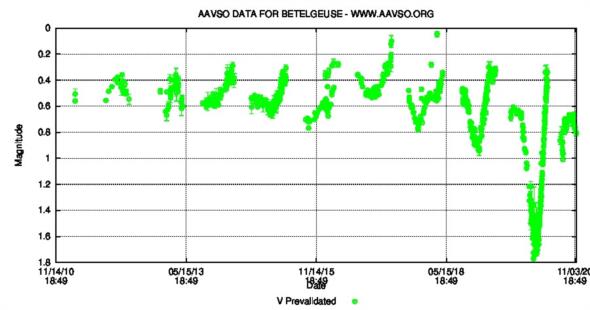