No takers on this one (probably too similar to the last puzzle) so I'll just walk through it quickly.

The rocket launched from Pad 40. That's lined up with the star trail for Zubenelgenubi so azimuth around 113°. Pad 41 is also visible, and it's near azimuth 90°.  Drawing rays on opposite bearings from those known locations, I found that they crossed relatively close to the Mission Control building and the VAB. This is a big change from the last SpaceX photo case where the photographer was way out on a back road. That suggests that body of water is the Turning Basin where Saturn stages, Shuttle External Tanks, and new SLS core stages have been delivered by barge. In the photo, there are various bushes right in the foreground and a small point of land extending into the water. That helps a bit. The photographer was probably located directly in front of the famous Countdown Clock that we all know from televised launches. And there's a final clue that nails it. It's as mundane as Zubenelgenubi is celestial. There's a pair of buoys visible. And they're a perfect match for the first pair of buoys in aerial photos of the Turning Basin.

In the alternate view by the "Teslarati" photographer, the location would have been just a bit further up around the shoreline of the Turning Basin. You can see the buoys in that image, too. 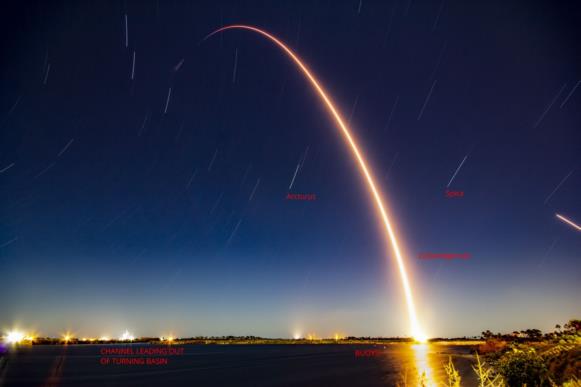 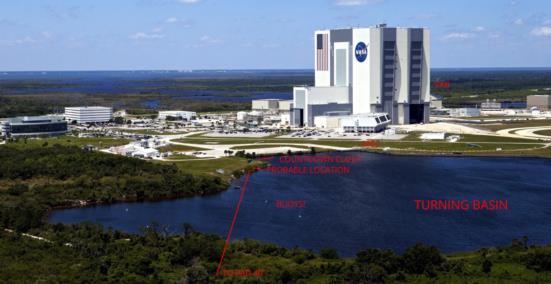