For twenty years I have directed students in navigation classes to analemma.com as a sort of "homework" assignment between days of two-day navigation workshops. It added "spice" to the discussion of time and longitude, and of course we cover the equation of time and the analemma in most of my workshops. The little website, analemma.com, is an excellent resource, accurate in its science with comprehensive, clear explanations and stylish art and animations as well as deeper detail for the expert, like analemmas on other planets. As the years passed, analemma.com also became something else: a sort of internet time machine. The creator, Bob Urschel, left it unchanged from the early part of this century and it reflected internet system requirements that dated back to 1998. For example it recommended "Windows 95 or later" and "Netscape Navigator" and suggested that "Quicktime" should be installed. It had become even a little nostalgic, like stepping back in time to the first dot-com boom. On archive.org, you can compare the 1998 version of analemma.com with it status in mid-October 2020, and it's almost identical. It was also an early example of a "concept website". Who would have thought to register a domain name for a concept like the analemma back then?

The site has now been updated to modern web standards, and it looks great. Bob Urschel apparently completed the update around the beginning of the year. He is also the author of a variety of aviation apps, which I am sure will interest some of you. Visit his personal website for a list. There are also apps related to the analemma, Analemma and Sungraph, for iPhones, iPads, and Macs (no Android or Windows). 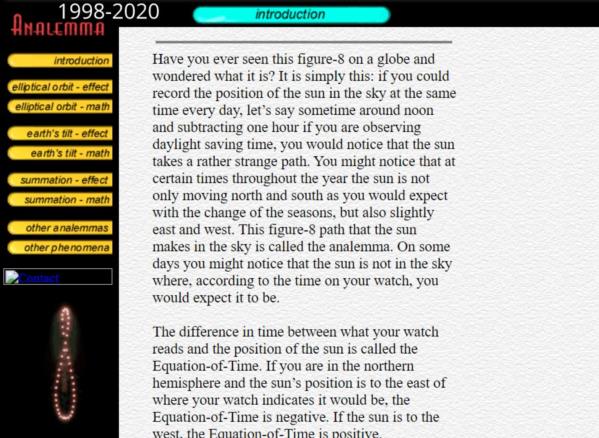 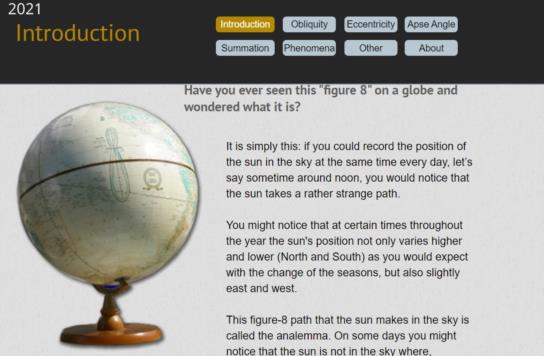