This is off-topic, but I hope some of you appreciate it.

Glen deVries was killed in a light plane crash in northwestern New Jersey on Thursday afternoon. You may have heard his name "in the news" last month. Glen fulfilled a lifelong dream when he flew in space for ten minutes just a month ago on a Blue Origin "New Shepard" flight. The New York Times has a good article on his life and death (*).

I can affirm that flying in space was a lifelong dream for Glen because I knew him. He was a student of mine at the Fieldston School in the Bronx, New York City back in the 80s. I remember launching model rockets with him and a few other science fans one afternoon after school. Glen's family, who were relatively wealthy, hired me to tutor him once a week for two years in whatever science topics I thought appropriate. We did "rocket science" and numerical integrations on his computer (I believe it was a well-equipped Apple IIe back then). We ran simulations of the "rocket equation", and I remember he was impressed by the implications. We even did "three-body problem" computations.

Around fifteen years ago Glen created a whimsical website, IsGlendeVriesInSpaceRightNow.com, when private "space tourism" flights became available. That website finally declared "yes!" on October 13 last month when he, and William Shatner --the original "Captain Kirk"-- at his side, launched into suborbital space. The website is still open, and he posted to it (actually auto-posted from his Twitter account) just a day or two before he died.

So very tragic, shocking, unbelievable to hear this news. Glen went on to become a molecular biologist and founded a major medical data company. He was a good kid when I knew him. Although we exchanged a couple of messages in recent years via Facebook, I couldn't claim that I knew him as an adult. But the interviews that I saw and read before and after his brief space flight demonstrated that the "good kid" had become a good man. So sad...

* The linked PDF copy of the NYT article will be available for 24 hours only. 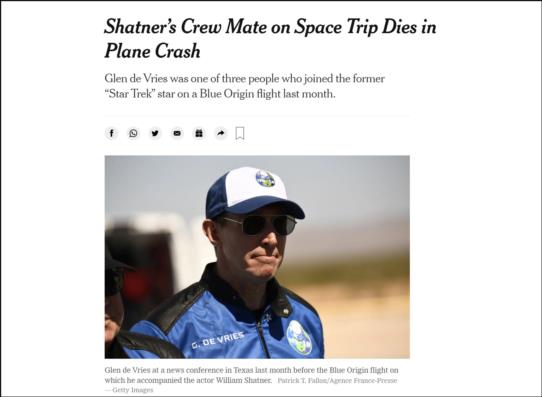