Good catch on that "foreword" error, Tony! There seem to be quite a few little editing errors in addition to the bizarre choices in general content. Greg already mentioned that the table which is supposed to be labeled "Appendix B" is instead labeled "Table 34" strongly suggesting it was generated by scanning an old table from a much earlier edition. Creating a table by scanning is extremely risky. In the attached image, you can see more evidence that this table was created by OCR of a scan. This one is obvious: a zero has been turned into a lower case letter "o". But you would never notice if a "5" has been rendered as a "3". Considering how easy it would have been to reproduce such a table by direct calculation today, it is really quite shocking that it was scanned. 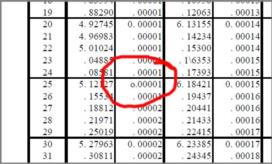