As Norm mentioned, there is an easy occultation of Aldebaran tonight for observers in most of the USA and Canada. There are good details and charts showing disappearance and reappearance times in an article on the Sky & Telescope web site.

For navigation contemplation, I've combined a portion of the reappearance chart with the disapperance chart so that we can see the "curve of position" for 0230 UT. This is a simple case of position-finding by lunar distance at known UT where, in this case, the lunar distance is zero. The observation that Aldebaran is sitting on the Moon's limb at that instant places us somewhere along that (nearly) elliptical figure. By the way, if we draw the view from the Moon the apparently elliptical figure would be an almost perfect circle since it is fundamentally the "shadow" of the Moon cast by Aldebaran. 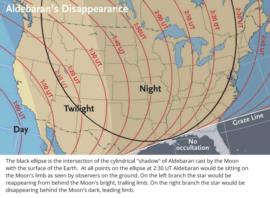