I wrote previously:
"While Wayne was observing from my secondary recommended location, I and another student from this weekend's class, Paul M, as well as a highly experienced occultation observer (from Massachusetts who drove down thanks to my suggestion on Sky & Telescope's website) all watched from the parking lot by the movie theater in South Kingstown, Rhode Island. Lots of fun. Saw Aldebaran blink out and then back with my own eyes via binoculars. For the remaining minute of the event, I watched on the video screen attached to our guest's telescope which removed my shivering hands from the equation. We saw several more clear vanishings and re-appearances. Very cool and lots of fun!"

Our observer from Massachusetts, Charlie W., has now posted his video with a great story told in the audio narration. And you can hear all of us chatting as we observe. You can hear me in there briefly: "we should see some actual blink-outs pretty soon..." and a little later about the "IOTA website" and commenting about how "it's kinda sad that this has no scientific value any more...". The video is a great account of the grazing occultation, and a nice video displaying just what we saw Saturday night. Watch until the very end of the video to see Charlie's amazing comparison of the observed light curve --the timing of the appearances and disappearances-- with the limb profile for our observing location. Just incredible! Or as Charlie says in the video, "dead accurate... totally dead accurate [...] this is just incredible." And it was quite satisfying for me, too, since I had picked this location specifically to get that profile for the light curve. Really terrific. Nice to see a plan work out.

There's a little extra drama in the story on my end. As some of you know, my car's mileage surpassed the mean distance to the Moon last year, and as I was driving to the occultation with no more than two minutes to spare to get to the observing location on-time, I noticed that my car's interior heat had gone cool. And that's a bad thing! Sure enough, a minute later the temperature gauge started to climb toward the red. I pulled off the road for 15 seconds, and it started down again. So I risked it and finished driving the last mile. The temperature gauge teased me with one last run up to red just as I pulled into the parking lot. An occultation and a dying car with lunar mileage, too! I didn't let on about this while I was there observing this wonderful event. I drove home slowly, stopping occasionally. When I got back to town, luckily there was a very popular band playing so I soon enough found someone who could spare some radiator anti-freeze. So all good in the end.

PS: Just so there's no misunderstanding here, in the video Charlie mis-identified me as the director of the planetarium at Mystic Seaport (understandable since we only had a few minutes to chat on that bitter cold night). Though I am in charge of all the celestial navigation classes there and have a long history at the Treworgy Planetarium at Mystic Seaport, the director is Brian Koehler, a very nice guy and a passionate educator. 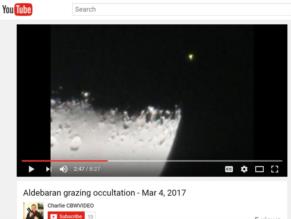