Reply
Re: Airline inflight Route Map Anomalies and a Puzzle
From: Brad Morris
Date: 2017 Oct 19, 18:50 -0400
Hi Robin
Having flown a large amount of commercial miles, I too have stared at that chart.  Monotonously.
Occasionally, they will leave the system on when taxi'ing about the airport.  When they did, I observed that the aircraft "direction" shown on the chart was matching every twist and turn.  It was showing actual instantaneous aircraft direction, not planned direction.
Brad
On Oct 19, 2017 5:45 PM, "Robin Stuart" <NoReply_Stuart@fer3.com> wrote:

On 2 October I flew from New York’s JFK airport to Honolulu, Hawaii on Hawaiian Airlines flight 51. As the inflight entertainment wasn’t free I spent a good deal of time reading and staring at the real time route map. A number of things seemed odd about it. First the “Time Since Departure” was grossly overstated and, had it been correct, we were probably due to drop out of the sky at any moment. Secondly arrows indicating the directions for New York and Honolulu made what seemed like rather large angles with the current track of the aircraft (see first attachment). I wondered why this might be and speculated that we could be flying close to a great circle but that the arrows showed the rhumbline directions. If that were the case then the distances shown might be rhumbline distances as well and I could determine this by noting the distance to New York as close as possible to Honolulu. The second attachment shows the route map just before it was turned off with a distance of 94km to Honolulu and 9,487km to New York.

I calculate that the great circle distance is 4,320NM or 8,000km and the rhumbline distance is 4,466NM or 8,272km. I also downloaded the aircraft’s actual flight track from Flightaware.com and find the total distance flown to be 4,446NM or 8,234km.

Does anyone, particularly pilots on Navlist, understand what might be going on here? Maybe they just wanted to be generous with their frequent flyer miles. I certainly hope that they have better information in the cockpit!

Assume that the distances to New York and Honolulu in the first attachment (New York 6,841km, Honolulu 2,780km) are accurate and represent great circle distances. What is the location of the aircraft? This is just the classic double altitude problem.

Assume that the distances to New York and Honolulu in the first attachment (New York 6841km, Honolulu 2780km) are accurate and represent rhumbline distances. What is the location of the aircraft? 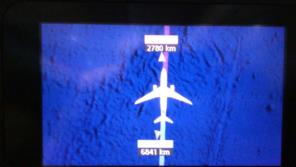 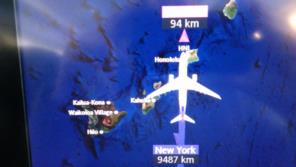 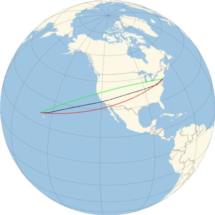