I took these coordinates and dropped them into Google Maps. When you switch to so-called "satellite view" over ocean, it shows ocean bathymetry. You can see ocean bathymetry in your photo of the in-flight display, as well, and it's a near-perfect match for the bathymetry that I see in Google Maps, after you rotate so that the plane is flying WSW. In the image below, the capture from Google Maps is on the right with north up. I clipped it to map the approximate region in the in-flight display. Look at the various linear features and especially the pattern of seamounts near the top of the pair of images. It's a match. This at least confirms that the in-flight system was using the actual position of the aircraft for its live plotting even in the middle of the flight over open ocean. 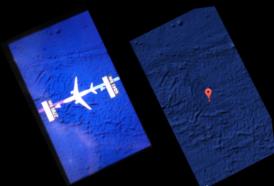