Reply
Re: A, B & C Azimuth Tables Questions
From: Doug MacPherson
Date: 2017 Feb 19, 18:26 -0800
David:
Thanks for the information and the attached file.  I have a similar template that I use which I have on my sight reduction forms.
Nice to see that it is basically the same.  Once I had place the rules on the template, using the ABC tables became a snap.
Doug
On Sun, Feb 19, 2017 at 2:33 PM, David C <NoReply_DavidC@fer3.com> wrote:

I find the A, B, and C Azimuth Tables a great addition to my CN tool kit. I use the versions found in Norie's Nautical Tables.

Does anyone know when these were first published in Norie's? Were they in the original edition back in the 19th century? I have never seen them in any editions of Bowditch. Was there a reason for this? Were they ever included in Bowditch?

According to Charles Cotter    Rosser, an editor of Norie's Epitome, inserted them in Norie in 1889.

IMHO the ABC tables are the best tables ever devised. Add/subtract  two three digit numbers and look up the azimuth in a third table. I agree that at first sight the rules can seem confusing but if you summarise them and add them to your worksheet there can be no confusion.

Why were they not included in Bowditch? Maybe because it is a US Government publication (-;  The 1958 Bowditch briefly mentions Blackburne, Lecky and the ABC tables.

In 1946 a US naval officer called Waller proposed a set of "ABC" tables. I have not looked at the respective formulas in detail but as far as I can tell Waller's ABC tables are completely different from what someone coming from the British tradition calls ABC tables. 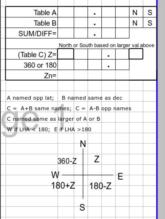 Confidentiality Notice: This electronic transmission, including attachment(s), is covered by the Electronic Communications Privacy Act § 18 U.S.C. 2510-2521, and is for the sole use of the intended recipient(s). Unauthorized review, dissemination, disclosure, or reliance on the content(s) of this transmission is prohibited.