Thanks. I did notice that there was also a slight shift in RA. I suspected the problem was more complex than my current understanding of the relationship between the observer's position and the apparent position of the body. Fortunately, the solution to my particular problem seems to be closer to my grasp as a person with only an extremely basic maths background.

I tried working the parallax and other corrections into the calculated geocentric distances in order to obtain an approximation of the topocentric distances. (Or, more accurately, an approximation of the slope of the topocentric change in distance.) I was pleased with the result. Attached are two graphs. In both, the blue dots represent my observations and the pink dots are calculated distances with corrections worked in with a trendline running through them. In the first graph, the yellow dashed line represents the pink trendline having been slid up for a best fit among the observations. It clearly shows that the first observation is an outlier, and that all subsequent observations are within a narrow band of error. In the seond graph, the red dashed line represents the pink trendline having been slid up to run directly through the two best observations (the 3rd & 7th). This gives an accurate representation of the actual errors of each observation: 1.4',0.1',0',0.2',0.3',0.2' & 0', respectively.

The method I used to calculate the corrections was the same one that Frank gives on his 'easy lunars' page. The only real difference is that I subtracted the inverse "DH" values (multiplied by the "corner cosines") from the calculated distance. I then added in the augmented semi-diameter. Since I chose the two times of the 'zero error' observations, I could directly compare them. They both differed by only 0.6'. But, as I said, the actual value of that difference matters little since it was the slope that I was really after. So far, this seems like a viable way to weed out outliers and select a suitable observation for the actual clearing process. I'll have to go back and try it on some of my old lunar sets to be absolutely sure.

Thanks to everyone for your input! 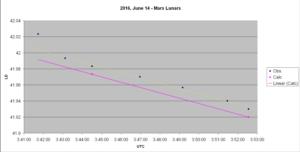 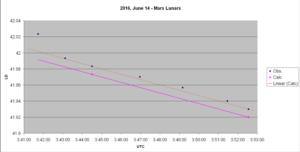