I'm rewriting some lunars and time-sight calculator programs to do a better job of getting the final longitude right. I don't have problems with any of the 19th century methods for finding Local Apparent or Mean Time but the last step of comparing it to Greenwich Time, mean or apparent, has often been a stumbling block.

The stumble is usually due to misunderstanding which onboard time system is in use and what  system for Greenwich and Almanacs is in use. Could someone look at this diagram and tell me if I have the essential methods of ship-board time-keeping correct? Also if you know what time systems Greenwich and published almanacs used would be a big help too. 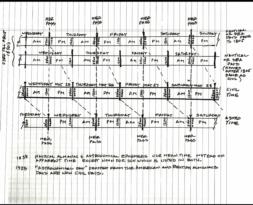 Each band is a run of consecutive days. Their names, meridian passage, AM/PM designations are shown for four systems: Nautical/Sea Days pre- and post 1805, Civil Time and Astronomical Time. The upper two bands are Nautical or Sea Time prior and post 1805. Each log book day began anew at the sun's meridian passage. In 1805, the British Admiralty decreed that days be named in agreement with Civil Time, however, the hours remained the same as before. The third band from the top, is the Civil Time system we use today. The bottom band is the Astronomical Day.

I'm looking to know two things. First, is this diagram right. And second, what system(s) did the almanacs used for what years.

Any help is appreciated.