Tomorrow, June 3, 2014, is the thirtieth anniversary of the sinking of the sail-training tall ship "Marques" (usually pronounced as if spelled "Markez"). The Marques sank around 4am local time on June 3, 1984 in a sudden squall on the first night of a race with other tall ships after departing Bermuda the previous evening. The vessel sank immediately with some estimates from survivors suggesting it sank in less than thirty seconds. Nine crew and sailing trainees survived. Nineteen were lost, most as they slept in their bunks below decks. Among the lost were two employees of Mystic Seaport: Andrea Lee of Mystic who was 19 years old and Sue Howell of Hebron, Connecticut who was 37 at the time. Andrea Lee had been an interpreter and museum teacher at Mystic Seaport for two years. Susan Howell was associate director of the planetarium at Mystic Seaport and had worked there since the 1960s. Sue Howell had recently written and published a highly-regarded textbook in celestial navigation, titled simply "Practical Celestial Navigation". Even today it is popular among navigation students. Stuart Gillespie, described by The Day newspaper of New London as "one of the founders of the Sea Chantey program" at Mystic Seaport, was one of the survivors.

I myself worked at the planetarium at Mystic Seaport in high school and college, on and off from 1978 to 1985, and I knew Sue Howell. I remember her as kind, funny, professional, and intelligent, highly knowledgeable, and profoundly competent in her favorite subject, celestial navigation. She was a loving mom to her three young kids and devoted to her husband, Dave. For Don Treworgy, planetarium supervisor at Mystic Seaport for decades until his death in 2009, Sue Howell was a dear friend, confidante, and professional partner. Don had sailed aboard the Marques on the previous leg of the voyage from the Caribbean to Bermuda teaching celestial navigation and even providing the only reliable fix by star sights when the vessel's electronics failed. Don suffered from survivor guilt for the rest of his life in addition to the profound grief from the loss of his close friend. He worked daily to remember Sue and, with his strong encouragement, the classroom in the lower level of the planetarium was renamed in her honor: the Susan P. Howell Classroom (now located in the "Treworgy Planetarium" which was renamed for Don a few months before he died in 2009).

The sinking of the Marques has been widely considered a watershed in the "sail training" community leading to modern safety standards which, it is believed, have prevented and will prevent similar tragedies. The story of the sinking of the Marques and some of its causes has been re-told eloquently in the book "Tall Ships Down" written by Dan Parrott, himself a survivor of the sinking of a tall ship, the "Pride of Baltimore", just two years after the loss of the Marques. Anniversaries of tragedies have fading relevance with each passing year, and eventually they pass into memory. But as Mystic Seaport's "flagship", the Charles W. Morgan, begins its 38th Voyage, it seems important this year to recall the loss of the Marques, thirty years ago, and remember those Mystic Seaport employees who were lost with her. They would be proud to see the Morgan sail again. 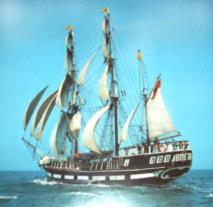