Most of you know the "Mystic River Diorama" at Mystic Seaport (here's an article about it published in Yankee magazine in 2008). 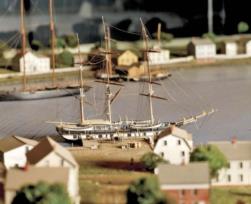 The diorama is an exact scale model of the whole Mystic area from below the current railroad bridge and north past Greenmanville, the current location of Mystic Seaport. Consultants who study the museum's potential apparently "ooh" and "aah" over it as much as children, who most folks suppose are the diorama's intended audience. It's a wonderful, incredibly valuable creation that the museum has had a great deal of trouble utilizing and converting into an engaging exhibit. Virtual reality changes that.

Imagine if you could get inside the "Mystic River Diorama" as a virtual world and explore it at street level... This would be "Google Street View" but on the miniature scale of the diorama. You could walk along the streets and sail down the river in 1860s Mystic, with the visual illusion of normal scale. Views like these can be displayed in virtual reality headsets as simple as the immersive "Google Cardboard" viewers, now widely available in classrooms worldwide. The technology to generate views in Google Street View is mostly scale-independent. Google has already scanned the museum grounds of Mystic Seaport for the visitor walk-through of the Village area.

I met with Steve White in October, 2013 (on a job interview) and spent five minutes evangelizing about this idea of virtualizing the "Mystic River Diorama" in "Street View" as something that would not only have tremendous educational value, but could also generate massive publicity for Mystic Seaport. It hasn't happened yet... In the meantime the exact same project has been completed at a miniature railway and diorama in Germany, and it is getting huge viral coverage in the news today (read here: http://mashable.com/2016/01/13/miniatur-wunderland-google-maps/#m1iQIj0OXuqg). Mystic Seaport could be the focus of these stories instead of the Miniatur Wunderland... Maybe next year?? :)

I apologize for a post that is not related to the 38th Voyage, but I figure this is the easiest way to bring this up again in a way that might find some attention at Mystic Seaport.