Re: Sleeping aboard and doughnuts on the Morgan
From: Matthew Bullard
Date: 2014 Jun 27, 13:26 -0400
I was on the Vineyard to New Bedford leg and slept in the fo'c'sle with about 20 other crew and voyagers. I'm 6'4" and could not stretch out at all. That being said, I slept better than I expected. There was a single fan that kept the temperature comfortable, though I never needed to actually get in my sleeping bag. I did hear that the fan noise and air movement was somewhat too much for a couple of people, but I was not bothered by it. I was thinking that sleeping on deck or pulling the mattress into the blubber room might have been a good alternative, but I don't think it would have been too well received and nobody else did it that I'm aware of.
Matthew Bullard
On Jun 27, 2014, at 1:16 PM, "Frank Reed" <NoReply_FrankReed@fer3.com> wrote:

Those of you who have already sailed on your voyage legs, did you sleep aboard the night before? In the fo'c's'l? Was the temperature bearable? Or was it possible to sleep on deck? Any other practical thoughts? I'm including a photo I took of the little galley on the CWM while it was at Fort Adams in Newport. And for the record, doughnuts are frequently mentioned aboard ship in historical logbooks, so that's some historically appropriate grub! 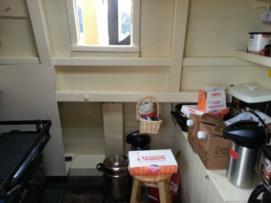