Stellwagen Day 1 (SD1) of the 38th Voyage of the Morgan, began with the "voyage to the voyage". Myself, I drove to Boston to catch the high-speed ferry. I decided to dive deep into 21st century navigation and let the Google app on my phone tell me what roads to drive to get there from southern Rhode Island. It's a simple enough route. I've driven it before, and there was 45 minutes of leeway in my schedule to arrive by 1:00pm. I expected I would arrive at 12:15 or earlier. No problem. But the app informed me that I would arrive at 12:20... then 12:35... Then, as I was approaching Providence, the ETA shot up to 1:05. Panic! At that point the software proposed an alternate route (to avoid an accident near I-95/I-495 and the long traffic jam leading to it). Should I trust the technology and take unfamiliar roads with a dozen turns and changes? Sure. Why not? It's 21st century technology at its best. Sextants are fun, but GPS is a blessing. I followed its directions and even travelled a quarter mile on a dirt road, but it worked and got me around the traffic mess to arrive on the dock in Boston at 12:20. There in Boston I chatted with a photo/video team from Mystic Seaport who were scheduled to stay aboard the Mystic Whaler that night. There's a huge team of people behind the 38th Voyage documenting it all.

I boarded the ferry and shot Lisa Gilbert a text (Dr. Gilbert is Mystic Seaport coordinator for our voyage group) saying that I was aboard. I wasn't entirely sure I would recognize her so I looked for someone reading a text and then looking around. That worked! I said hello to her and fellow voyager, Gary Wikfors, and we settled in on the ferry. We jetted across to Provincetown at a cruising speed of about 32 knots. As we rounded Long Point, south of Provincetown Harbor, I found the masts of the Morgan beyond the sand dunes through my little spotting scope. Entering the harbor, it was a bit surreal to see the Morgan, with the Mystic Whaler alongside, so very far from Mystic Seaport. That got me wondering... when was the last time that the Charles W. Morgan was north of 42° N latitude? Upon arrival in Provincetown, I had a couple of hours to kill, but burdened by my gear, including an octant and a sextant, I really couldn't walk around much, so I camped on the beach in the shade of the pier and waded among the hermit crabs at low tide.

Our pre-voyage beach meeting was scheduled for 5:15 on the beach, so the other voyagers came down and joined me at my beach camp where Lisa filled us in on the plans for the evening, and we all introduced ourselves (see the photo below). The weather was changeable that afternoon (this was Thursday, July 10), alternating between mostly cloudy and muggy and bright sun/hot and muggy. Since my project involves celestial navigation and seeing the Moon in the early evening, I was hoping for clear skies.

We were all impressed, and I think also amused by the contrast, when the boat arrived to take us out to the Morgan. I don't think any of us were expecting to board a yacht tender that clearly spent its days attached to a mega-yacht. This mega-yacht is Rena which has accompanied the Morgan on the 38th Voyage. It's a great white whale of a vessel, and we assume that this is where the "money" rides along to observe the outcome of this very expensive and audacious project from a luxurious perch. When the two massive outboard engines on the Rena tender roared to life, I had the distinct impression that we were in a time machine, flying down a time tunnel, taking us back to the 19th century. Amid oohs and aahs and "I can't believe we're really doing this" from other voyagers, as the Morgan loomed ahead, we pulled up to the small mooring dock in the middle of Provincetown Harbor. We found a little confusion there. Apparently we were not expected to arrive at that time (see the photo below). But no matter, schedules are made to be broken. We boarded and waited for our orientation talk.

Everybody's favorite crew member, third mate Rocky, gave us our orientation and safety tour of the Morgan as sunset approached. As she led us below, I noticed a young crew member walking around barefoot, so I asked if we could, too (when not under sail). And, oh yes, that was something I had to do! A few others were also soon walking around barefoot on deck. For me that was an experience that was not only "authentic" and "experiential" but it also was a way of saying "I live here tonight".

After stowing our stuff in the fo'c's'l, we finally got back up on deck and discovered that the clouds were clearing. We were treated to a serene sunset that lighted the ship and her rigging beautifully. The temperature was perfect. The air was calm. And there weren't even flies or mosquitoes to bother us since were a good distance out from shore. In the photo below, you can actually see the serenity on Anne's face as the Sun goes down.

After sunset it was time for me to get to work. I tossed a string with a fishing sinker over the side to measure the "height of eye" for an observer on the main deck. See, the Earth is a big round ball, so when you look out to the sea horizon from a point that's not right on the surface, the visible horizon is lower than it should be by a small fraction of a degree, and that little correction to the altitudes of the Sun and stars varies with height of eye (the correction in minutes or arc --or nautical miles in a fix-- is nearly equal to the square root of the height of eye in feet, thanks to a numerical coincidence). I tossed my line over the side looking for the splash as the sinker hit the water (harder to see than expected) and then hauled it back up to read the height. The previous night I had marked off my length of twine, stretched across my apartment, with a red mark every five feet. I was a little surprised to find that the height of eye is only about fourteen feet on the Morgan.

As twilight deepened, the Moon emerged from the clouds and soon there were stars out, too. But this was nearly Full Moon, and just offshore from the bright lights of Provincetown, so nothing spectacular. I shot a bunch of "lunars," measuring the angle between the Moon and the planets Saturn and Mars which were both easy targets even early in twilight. And I showed a few other voyagers how a sextant works. A couple took some altitudes of Mars for practice. As part of my project, I also observed two passes of artificial satellites determining our position within one nautical mile --no sextant needed, just a quick visual observation compared against predicted positions.

Lights out and quiet ship were called at 10:00pm and after chatting on deck with other voyagers in increasingly hushed voices, it was time to head below. I slept from about 10:30 until roughly 2:00am and then found myself wide awake. The bunks in the fo'c's'l were snug little coffins. I would estimate the air temperature was around 80 degrees or more in my part of the cabin. I rolled my pillow over to the cool side again and again until I realized that there was no cool side left. O the misery of stifling air and no way to crawl out from a tiny bunk! An hour later, I could not live without some news from the 21st century. I could barely reach, but I managed to twist my arm on an improbable angle and feel around in my bag below my bunk for that familiar metal and plastic frame... five inches of super-technology that could save the night: my smartphone. And of course, in Provincetown Harbor, we were in 4G Internet country, so I soon was back in contact with the information universe. I posted a little note on Facebook, checked the weather, read about the economic crisis in Portugal, and generally re-assured myself that the world did not end at the margins of my coffin-bunk. Around 5:45, coherent thoughts were slowly replaced by dream logic, and I realized with relief that I was drifting off to sleep again. An hour later, a voice sang out, "Good Morning in the fo'c's'l! It is 6:45. Time to wake up. On deck it's overcast, and a bit chilly. Good morning in the fo'c's'l!" And we all began the process of extricating ourselves from our bunks... 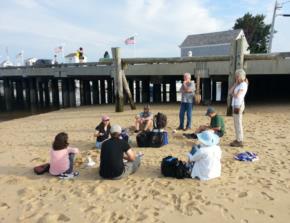 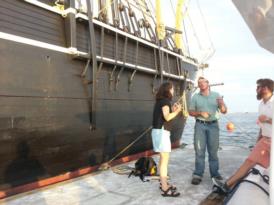 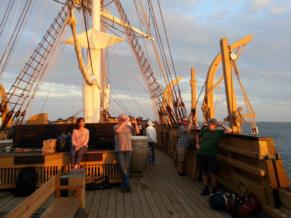